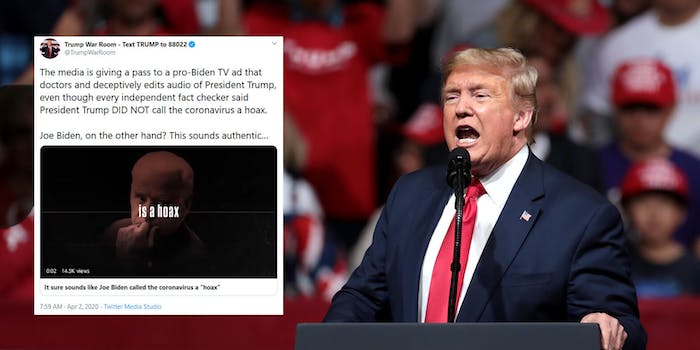 The Trump team has been upset with a manipulated ad. Their solution? Release their own.

President Donald Trump‘s reelection team has released its own video to make it appear like former Vice President Joe Biden called the coronavirus a “hoax.”

The video, which was posted on Twitter on Thursday morning, is in response to the campaign’s efforts to get an ad created by a liberal super PAC off the air. That ad highlights coronavirus cases over audio that makes it seem like Trump called the virus a hoax.

Last week, the president’s reelection campaign threatened legal action against television stations airing the ad, which shows a graph of coronavirus cases in the United States steadily rising over clips Trump has made about the virus.

One line in particular, where Trump says “this is their new hoax,” was edited to make it seem like the president was calling the virus not real.

On Thursday, the reelection campaign released their own video—claiming it to be “authentic.”

“The media is giving a pass to a pro-Biden TV ad that doctors and deceptively edits audio of President Trump, even though every independent fact checker said President Trump DID NOT call the coronavirus a hoax. Joe Biden, on the other hand? This sounds authentic…” the reelection campaign tweeted.

Their solution to being upset about manipulated audio? Release their own.

And if networks refuse to play it, they can scream mainstream media bias.