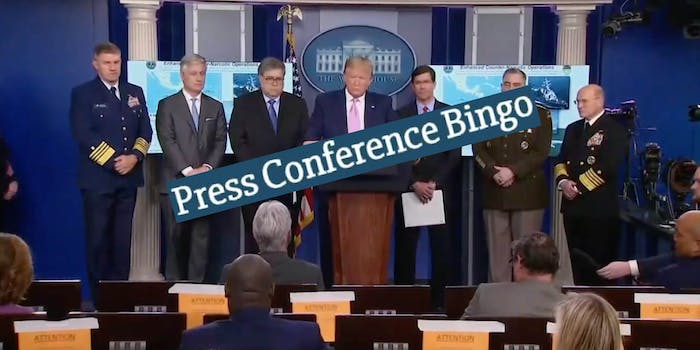 The staffer who showed pictures of the game online has since deleted her tweet.

As Trump and the White House Coronavirus Task Force briefed reporters on the latest news regarding the virus, one member of the committee tweeted out a photograph of a bingo card she said was being used by her and other staffers.

The image, posted online by Trump Victory regional director Olivia Brown, was deleted shortly after, but not before screenshots were taken by several people online.

Some of the bingo spaces including terms such as “Social Distancing” and “Invisible Enemy,” a reference to the virus frequently used by Trump.

Other spaces on the card referred to “Italy” and “N95 Masks,” leading many to accuse the staffers of not taking the global pandemic seriously.

Since deleting the tweet, Brown has not referenced the game online. Fellow staff members tagged in Brown’s tweet have no references to the game on their profiles either.

Trump stated during Wednesday’s press conference that he may consider grounding certain flights in an attempt to stop the spread of the virus.

News of the bingo game comes just one day after the task force revealed that deaths in the U.S. from the disease could top 100,000.