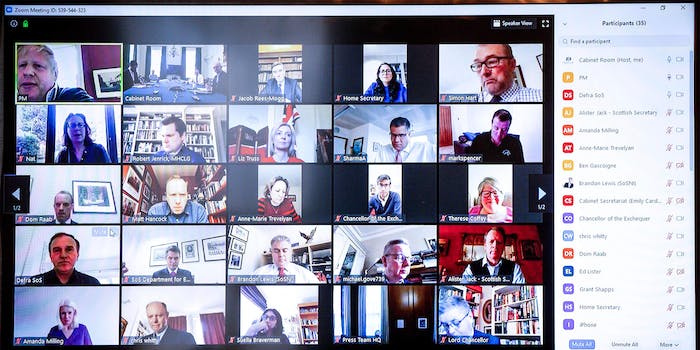 With England’s coronavirus lockdown entering its second week and members of the British government infected, it makes sense for them to have moved their meetings online.

But when prime minister Boris Johnson shared a screenshot of his first-ever digital cabinet meeting on Twitter, he gave the public a little more than he should have. Namely the ID number for the cabinet’s Zoom meeting, which is visible at the top of the screenshot. It also included numerous usernames listed down the side.

People were not impressed by the government’s grasp on internet security.

Even though the meeting ID was password protected, it’s not that hard for people who know what they’re doing to crack a password when they have other information available.

And that’s assuming everyone involved has taken password security as seriously as they’re supposed to.

There were some pointed comments about what the password involved might be. One suggested 350mAweek, which was a reference to the false promise made in the run-up to the EU referendum which claimed leaving would free up $350 million a week for the NHS.

Overall, it doesn’t seem to be a good look for Johnson and his government.