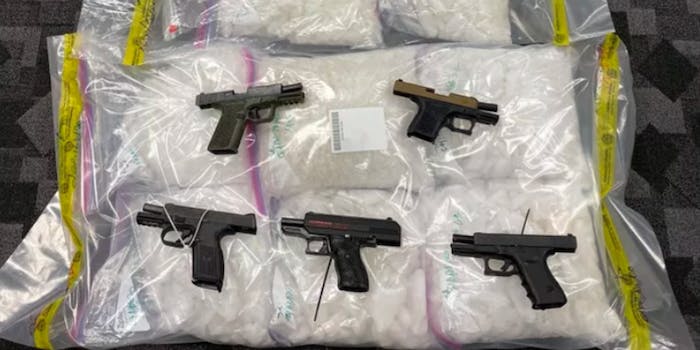 The operation saw arrests in the U.S. and Europe.

The US Justice Department (DOJ) announced on Tuesday the results of an international law enforcement operation aimed at taking down drug traffickers on the dark web.

Known as Operation DisrupTor, named after the anonymity network Tor that’s used by many to access the dark web, the effort lead to more than 170 arrests and the seizure of over $6.5 million.

“Operation DisrupTor actions have resulted in the arrest of 179 Darknet drug traffickers and fraudulent criminals who engaged in tens of thousands of sales of illicit goods and services across the United States and Europe,” a DOJ press release states.

Lead by the DOJ’s Joint Criminal Opioid and Darknet Enforcement (JCODE) team and the European Union’s (EU) law enforcement agency Europol, Operation DisrupTor was able to seize not only drugs and cash, but firearms as well.

“This operation resulted in the seizure of over $6.5 million in both cash and virtual currencies; approximately 500 kilograms of drugs worldwide; 274 kilograms of drugs, including fentanyl, oxycodone, hydrocodone, methamphetamine, heroin, cocaine, ecstasy, MDMA, and medicine containing addictive substances in the United States; and 63 firearms,” the DOJ said.

In total, 121 arrests were made by the U.S., which included two individuals from Canada. Officials in Germany arrested 42, while the Netherlands was able to arrest another eight. The United Kingdom saw four arrests, Austria three, and one in Sweden.

“Criminals selling fentanyl on the Darknet should pay attention to Operation DisrupTor,” said Deputy Attorney General Jeffrey Rosen.  “The arrest of 179 of them in seven countries—with the seizure of their drug supplies and their money as well—shows that there will be no safe haven for drug dealing in cyberspace.”

But not everyone believes the operation was that significant. Given the scope of the dark web drug trade, some have argued that Operation DisrupTor, much like other dark web investigations, will do little to disrupt the flow of illegal goods.