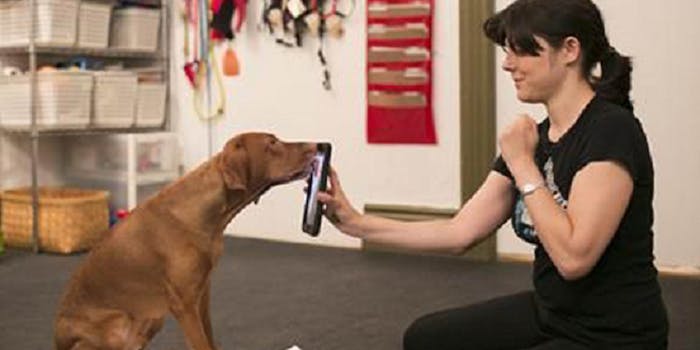 We're taking something beautiful and teaching it our insufferable ways.

At this point we’re all well aware of how to take a selfie. In order to accessorize this activity, there are items like the Selfie and the Selfie Stick, because there is a market being created around front-facing camera technology.

But this creativity isn’t being applied to humans alone, because now we’re getting dogs in on the fun. This is a real, serious, not-a-joke tutorial on how to teach your dog to take a selfie. Photojojo got NYC School for the Dogs to help put together this handy guide.

Basically, you get your dog into hitting its nose against an iPhone or iPad by putting peanut butter there, and then eventually taking it away until your confused animal is so addicted to screen-flavored PB that it just smashes its face into your device even when there’s no food there.

It’s the ol’ Pavlovian dog trick. But this time, it’s your dog, not Pavlov’s, and you’re crazy.

I guess the photos are cute, but not cuter than a photo you just took of your dog with your own damn fingers and opposable thumbs. If you’ve got an iPhone or iPad laying around you don’t mind training your dog to hit with its face, then go for it. (Also, you have too much money.)

This idea is rather depressing, but the NYC School for the Dogs seems like a really nice place and it recently burned down. There’s a fundraiser going on to help them rebuild; go give them some money instead of training your dog to mimic one of the worst things humans do with iPhones.