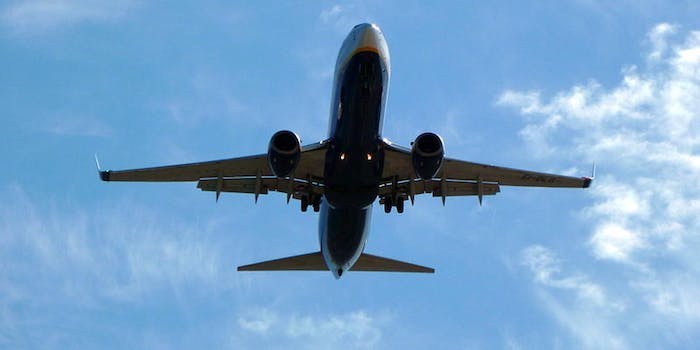 Department of Transportation may ban cellphones on planes

Long flights are bad enough without having to listen to your neighbor’s idiotic conversation.

The Department of Transportation is in the midst of deciding whether or not to prohibit people from making phone calls while flying.

The Wall Street Journal reports that in a speech last week, Department of Transportation General Counsel Kathryn Thompson said the agency is in the process of deciding if it will place restrictions on how cellphones are used on airplanes.

The Journal wrote that Thompson said the government is planning to issue a proposal that could ban people on flights from either sending or receiving voice calls on their mobile devices—using those devices for non-voice activities, such as playing online games or tweeting about the crying baby in the back row, would likely still be allowed.

It is important to note that nothing has actually been proposed either way. In February, the agency began collecting comments from the public about whether or not it should make a rule restricting voice communications for passengers on flights going to and from the United States. Nothing official, however, has actually been proposed by the department, which is still in the process of weighing the feedback it received from the public.

The DoT’s actions on this issue were triggered late last year when the Federal Communications Commission voted to lift restrictions that had previously prohibited in-flight calls. These rules were primarily concerned with safety and we imposed in the early 1990s due to fears that the wireless signals from cellphones could interfere with airplanes’ navigational equipment. The FCC’s decision was based on a growing consensus that using cellphones on airplanes doesn’t actually pose an acute safety threat.

The FCC’s rules don’t universally allow phone calls to be made on airplanes; rather, it allows that decision to be left up to each individual airline carrier.

The true threat, however, has to do with etiquette. The FCC’s move incited a backlash among a traveling public weary of having to spend hours listen to annoying strangers’ chatting away on the phone while sitting next to them on long flights. In a Quinnipiac poll, American voters said they opposed allowing cellphone calls on flights by a nearly two-to-one margin.

The issue quickly attracted the attention of Congress and, shortly thereafter, the House of Representatives’ Transportation and Infrastructure Committee approved a bill by Rep. Bill Shuster (R–Pa.) to ban phone calls on flights.

?Airplane cabins are noisy, crowded, and confined,” Shuster said during the February hearing. “Most passengers would like their flights to go by as quickly and as quietly as possible. Subjecting passengers to potentially multiple loud phone conversations… would obviously diminish the comfort of any flight.”

Shuster’s bill has yet to receive a full floor vote.

Even some cellphone companies have come out in public against allowing cellphone calls on planes. In 2005, Cingular—now AT&T Wireless—insisted that even if phone calls were allowed on flights, it would urge it customers to refrain from making mid-air calls. “We believe there is a time and a place for wireless phone conversations, and seldom does that include the confines of an airplane flight,” the company wrote in a letter to the Federal Aviation Administration.

Cellphones typically don’t get service when in mid-air, but mobile devices can briefly pick up signals from cell towers on the ground while they’re flying overhead. As Bill Rojas, the director of telecom research at IDC Asia Pacific, told CNN, for passengers on an airplane to get a signal from a nearby tower, the plane would have to be flying fewer than 10,000 feet from the ground.

It’s also possible for airplanes to utilize miniature mobile base stations called picocells to provide cell service onboard. The FCC’s rule only affects flights equipped with picocells, attempting to make calls with signals from ground-based cell towers is still prohibited.

However, as an increasing number of airlines are offering in-flight Wi-Fi to passengers, the simplest way for airline passengers to make calls on their phones is through the use of VoIP services like Skype. Since no concrete proposal has yet been put forward, its impossible to say if any future regulations would affect VoIP as well as cellular service.

An airline industry representative told the Journal that letting passengers make in-flight phone calls isn’t exactly a top priority; but would prefer to make the decision of whether or not to allow them on their own terms. “Airlines aren’t clamoring to allow mobile phone use during flight, and some have already said they’d prohibit it on their own flights,” International Air Transport Association general counsel Jeffrey Shane noted, mentioning that adding the equivalent of soundproof phone booths may be something airlines could explore in the future.

Outside of the United States, there’s been a trend in recent years to permit airborne mobile phone use. U.K.-based airplane cellphone service provider AeroMobile noted that, as of late July, the company is currently offering cellular connectivity on more than 430 flights per day on 13 different global carriers such as Lufthansa and Virgin Atlantic.

AeroMobile CEO Kevin Rogers wrote in a blog post that, on his company’s service, passengers are far more likely to send text messages or surf the web than make voice calls.

If the Department of Transportation does eventually decide to issue new rules prohibiting cellphone calls on planes, it would then enter into a comment period where members of the public could weigh in on the proposal.