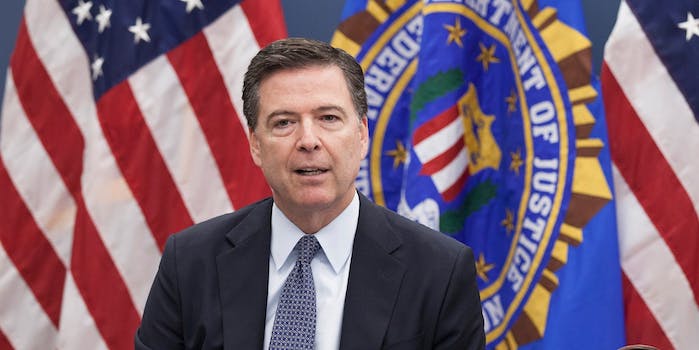 Whatever happened at the end of a classified briefing Friday morning has rattled Democratic members of Congress, leaving the American public to wonder what exactly is going on in the upper echelons of the U.S. government.

Following a classified briefing on the U.S. intelligence community’s report on Russian hacking, Democratic House lawmakers expressed frustration and dismay with FBI Director James Comey, who attended the briefing, reports the Hill. Some members said they had lost confidence in his ability to lead America’s top law enforcement agency.

Because the briefing was classified, the lawmakers are blocked from revealing what was said, adding a concerning mystery to the neverending saga of the 2016 election.

“I was nonjudgmental until the last 15 minutes. I no longer have that confidence in him,” Rep. Tim Walz (D-Minn.) said of Comey following the briefing.

Comey has become the focus of Democratic consternation following his release of a letter to members of Congress signaling a continued probe into Democratic nominee Hillary Clinton‘s emails just 11 days before Election Day. The revived inquiry into emails Clinton sent as secretary of state ultimately produced nothing, but Comey’s letter is seen as a key factor in Clinton’s loss to President-elect Donald Trump.

On Thursday, the Department of Justice inspector general opened a wide-ranging internal investigation into the FBI and the Justice Department’s actions during the 2016 election over lawmaker concerns of politically motivated actions.

After Friday morning’s briefing, Rep. Ted Lieu (D-Calif.) reiterated his claim that Trump is not telling the truth about Russia’s attempts to disrupt the election.

For Members of Congress who attended classified Intel briefing today, I reiterate my call that you demand @realDonaldTrump to tell the truth

The Hill reports that, despite reservations, Democrats are hesitant to attempt to remove Comey because a Trump replacement may be worse.