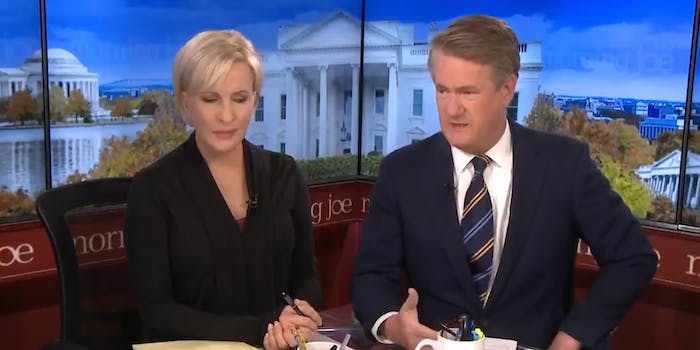 A lot of people didn't agree with his take.

Morning Joe hosts Joe Scarborough and Mika Brzezinski drew ire from some people online on Monday after they criticized chants of “Lock him up” directed at President Donald Trump during Sunday night’s World Series game.

Trump, who attended Game 5 of the World Series, drew boos and chants from the crowd when he was announced on screen at the game.

Social media posts show that in addition to the boos, there were some chants of “Lock him up,” a riff on Trump’s “Lock her up” chant he encouraged about Hillary Clinton at rallies leading up to the 2016 presidential election.

Full on “LOCK HIM UP! LOCK HIM UP!” chants heard throughout the crowd at Nats Park after President Trump was announced and shown on screen here #WorldSeries pic.twitter.com/1ktVXkHYFy

Scarborough and Brzezinski addressed the chants on Monday during Morning Joe on MSNBC.

“I speak to the ‘Lock him up’ chants,” Scarborough said. “Again, it’s just un-American. It started with Donald Trump, in fact he’s made it the centerpiece of his campaign rallies.”

“We find it sickening when it happens at his rallies, I find it kind of sickening to watch people leering at the president,”  Brzezinski added.

“Of course it’s sickening. We are Americans and we do not do that,” Scarborough replied. “We do not want the world hearing us chant ‘Lock him up’ to this president or to any president. That’s why I’m saying, let’s hope as we move forward maybe this is one less fascist tactic he and his supporters use during chants.”

"We are Americans and we do not do that. We do not want the world hearing us chant 'Lock him up' to this president or to any president." — @JoeNBC pic.twitter.com/9IgMCETBdn

You're wrong, Joe. The world should know how American people feel about our leader. They shouldn't judge us all by an obnoxious braggadocio who is out to line his own pockets and makes bad decisions–in office only because of a boondoggle. #MorningJoe https://t.co/s9aA9Ro2V1

Hurling some politician’s own hypocritical slogan back at them at a choice moment is every American’s right. It doesn’t mean you’re endorsing their principle and deserve to be tut-tutted on morning joe.

What did @Morning_Joe want them to chant? No Quid Pro Quo? This big phony jerk came face to face with reality last night, outside of his staged circuses, people hate him, and it was beautiful and glorious.

I happen to think that it’s un-American to:

– illicit foreign help in an election

– Denigrate immigrants and lock their children in cages

– Abandon allies to be slaughtered @Morning_Joe, f u

Sorry Joe and Mika, but what Trump has put us and our Country through for 3 years, the abuse, etc. We deserve to be happy a day because the Worst Person Ever got a frigging boo and chant. Boo Hoo! #MorningJoe

Scarborough also pushed back against the criticism in a series of tweets on Monday. All of them quickly drew an intense ratio.

“So let’s see if I’ve got this straight: When crowds chant “Lock her up” toward Hillary, it is illiberal and anti-American.  (I agree). But when crowds chant the same toward Trump, it is suddenly a fulsome exercise of sacred First Amendment rights. What hypocritical clowns,” the host wrote. “If you think that democracy is strengthened by calling for the arrest of political opponents, you’re as ignorant and illiberal as Trump himself. Delete your account and read some civics. Stop embarrassing yourself. Republicans, look at the response to a very traditional view that in America, we do not call for the arrest of political opponents. And then understand that you reap what you sow. A republic if you can keep it. Seacrest Out.”