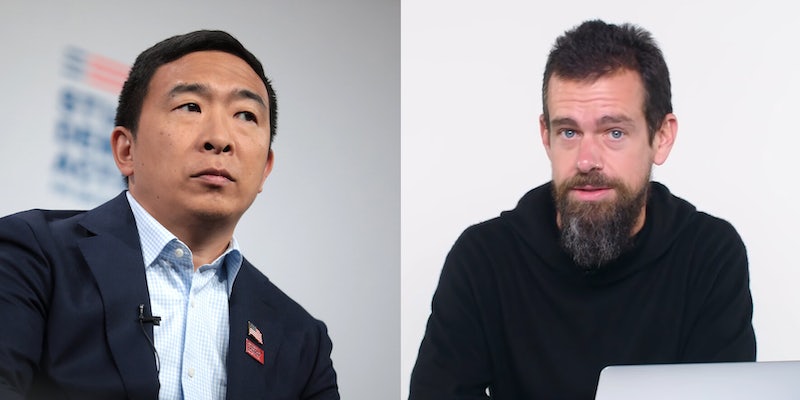 Dorsey thanked Yang in February for 'bringing universal basic income back into the national conversation.'

Dorsey made the announcement on Yang’s podcast “Yang Speaks” that was released on Thursday. The donation will be made to Humanity Forward, a non-profit launched in March that focuses on “on building human-centered capitalism” and endorsing candidates who support universal basic income.

Universal basic income was a major component of Yang’s presidential campaign, where he said he wanted to give $1,000 a month to every American.

On the podcast, Dorsey said universal basic income was “long overdue” and that the only way to change was “experimenting and showing case studies of why this works.”

“Every single field is going to be touched by automation, and UBI to me represented a floor,” Dorsey said on the podcast. “A floor that people could stand on and really have the knowledge and peace of mind ultimately that they could survive, and eat, and feed their children, while they are learning how to transition into this new world.”

The Twitter CEO supported Yang during the Democratic primary and wrote that he was “sad” he was dropping out of the race after the New Hampshire primary.

He also thanked Yang for “bringing universal basic income back into the national conversation.”

“Really sad Andrew is dropping out. He’s an incredibly authentic person who was focused on solving the big existential problems facing the world. Thank you Andrew for bringing universal basic income back into the national conversation. It’s well overdue. #yanggangforever” Dorsey tweeted after Yang announced his intention to drop out.

Last month, Dorsey announced that he was donating $1 billion in equity from Square, the payment company that he is also the CEO of, toward coronavirus relief.

After the pandemic, Dorsey said the money would go toward “girls’ health and education,” and universal basic income.