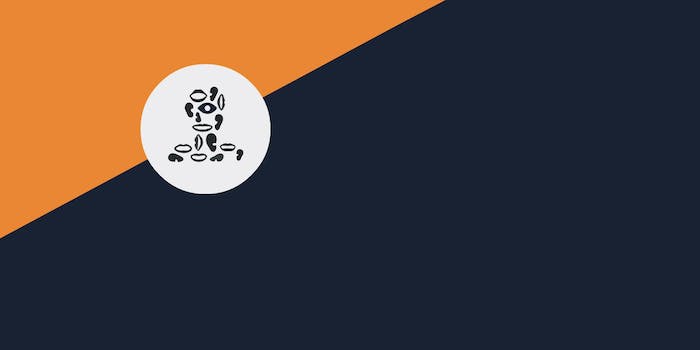 The wisdom of strangers: Crowdpilot livestreams your private conversations

An art project disguised as an app wants people to trust in the crowd.

We seek answers from oracles, books, gods, and bearded men with psychiatry degrees. Tea leaves are stirred and coffee grinds upturned in tiny cups in attempts to divine the right way to proceed. Self-help books are an $11 billion industry. Everyone is on a search for wisdom.

But would you ask a total stranger to listen in to your conversations, hoping they might have some knowledge you lack?

A new app called Crowdpilot offers a way to appeal to this “wisdom of the crowds,” or at least strangers: Crowdpilot lets users select the kind of social situation they are entering (a date, a family gathering, a meeting) and then they can invite Facebook friends or strangers to listen in on what’s going on and send comments about the situation. If no one from the public of Facebook is around, users can hire people sourced from Amazon’s Mechanical Turk program to listen in. It invites a bunch of outsiders to become your personal, many-voiced digital Cyrano de Bergerac.

The app has been mischaracterized by a few different media outlets as a way to record and livestream phone conversations; a creepy third party to the one of the only (relatively) private communications we have left. Not only is that not its intended use, that’s not a possible use, since it doesn’t run in the background while a phone conversation is going on. Crowdpilot is meant for two or more people who are having an IRL conversation. 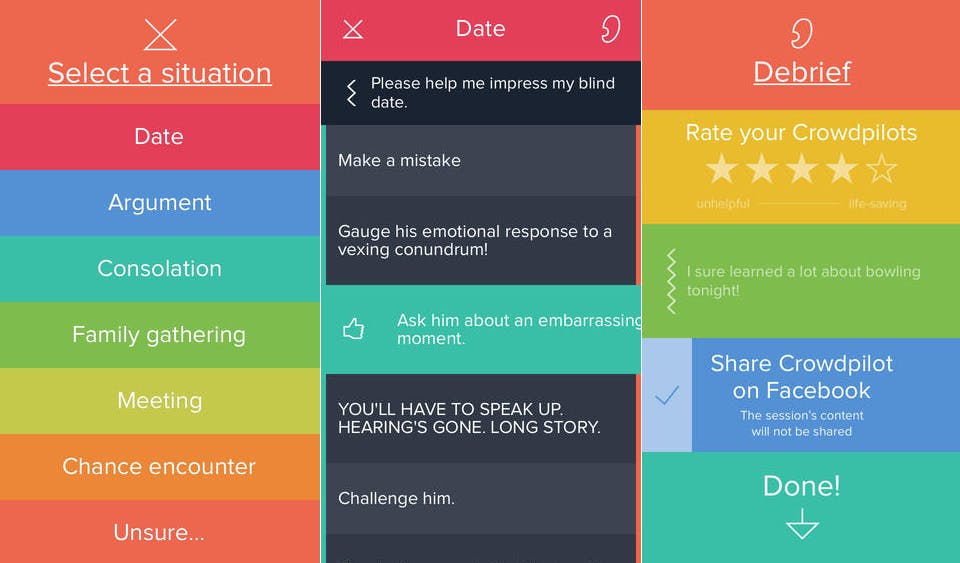 If these people want someone to mediate their conversation or chime in, they can check the app to see if anyone is available to listen in. Someone could attempt to do this without letting the people around them know, which is creepy and not Crowdpilot’s intended use. But since the people responding on Crowdpilot type their messages into a Twitter-like feed, the person who solicited their opinion would have to keep looking down at their phone constantly to retrieve the advice. That might work at a party, but on a date, it’d be pretty obvious. The app is designed not to work discreetly to avoid recording people without their knowledge.

“This is not meant to erode privacy or to be for surveillance or eavesdropping. The app clearly states you must tell everyone involved, and it is intended to be used by two or more people that are having a conversation and would like some help, much like a mediator or therapist or coach might help,” McCarthy explained. McCarthy characterized it as an art project, though she noted that many of the people use it like any other app.

Around 12,000 users have downloaded Crowdpilot, so it’s still an intimate crowd—and the app isn’t without its bugs. I had trouble downloading it; the app wouldn’t move past a green screen (and looking at the reviews, it appears this is an ongoing issue). If McCarthy wants the app to expand outside of its niche, she’ll have to make sure issues like that don’t persist, because we tried three different devices and it never worked. However, the Web version works for people who want to listen in and offer advice, so we tried that—and while the audio wasn’t working very well, I offered some words of encouragement (as per the app’s policy, I can’t tell you about the details of the conversation itself).

Crowdpilot comes on the heels of secret-sharing apps like Whisper and Secret, and it shares the appeal of interacting with strangers, though it takes the interaction to a whole new level of intensity. Whisper and Secret allow people to share their experiences anonymously with others through text, but Crowdpilot asks strangers and friends to interrupt or contribute to experiences as they happen. It may not be meant as a surveillance app but it invites a crowd to formerly intimate moments. This may prevent the app from catching on (as will, obviously, the fact that it isn’t working right now, at least for some users).

Or, perhaps, the next time you’re struggling on a first date, you can suck it up and ask the clammy-handed person across the table if Crowdpilot can help you get the conversation started.