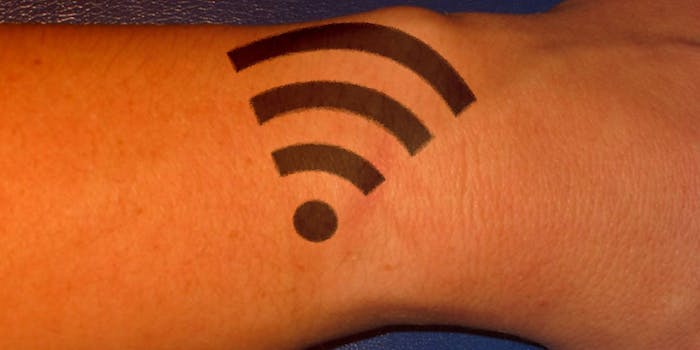 Remix via Max Fleishman Photo by Jen via flickr

'This is an open invitation to terrorists, drug dealers, and sexual predators.'

WhatsApp‘s decision to implement encrypted messaging for its more than 1 billion users “is an open invitation to terrorists, drug dealers and sexual predators to use WhatsApp’s services to endanger the American people,” Sen. Tom Cotton (R-Ark.) said today.

WhatsApp, which is owned by Facebook, rolled out an update on Tuesday that protects every text, photo, and video message from interception by criminals, spies, law enforcement, or any other eavesdroppers.

Cotton, along with a powerful group of American lawmakers and law-enforcement officers, argue that encryption impedes lawful court orders and puts American lives in danger. 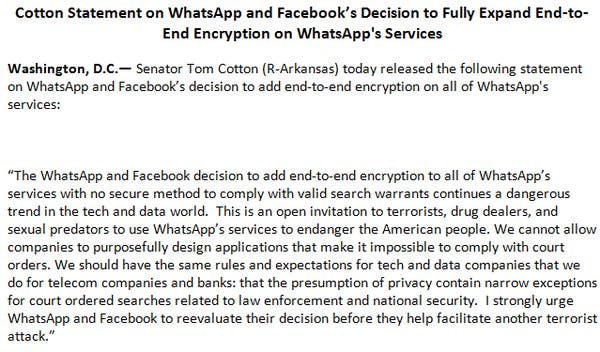 A vast consensus of technologists vocally disagree, arguing instead that any so-called “backdoor”—intentional weakness for the purposes of surveillance—in encryption will weaken the cybersecurity of Americans overall.

“Weakened encryption has been repeatedly shown to render both organizations and individuals vulnerable to surveillance–whether by government or malicious actors,” Simon Crosby, the chief technology officer of the security firm Bromium, told the Daily Dot. “Ultimately, if we make strong encryption illegal then only criminals will have access to strong encryption–which is precisely the opposite of the desired outcome. The encryption genie is out of the bottle, and there’s no putting it back.”

Some members of Congress are pushing back against Cotton’s assertion.

“While some continue to spread fear about modern technology, the fact is strong encryption is essential to Americans’ individual security,” he said in a statement to Reuters reporter Dustin Volz. “Attacking the use of strong encryption only empowers criminals, foreign hackers, and predators who will take advantage of weak digital security.”

Members of Congress expecting new legislation on encryption this week co-authored by Sen. Richard Burr (R-Va.) that will “pierce through encryption.”