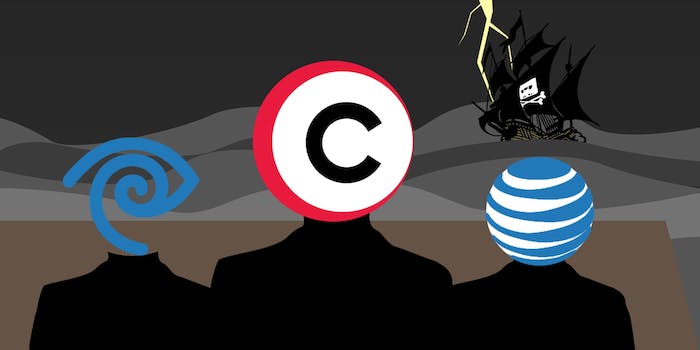 The system would redirect pirates to legitimate sites for buying and streaming media.

A source with direct knowledge of the situation told the Daily Dot Tuesday that not only is Internet service provider Comcast considering a new plan that would direct would-be pirates to sources where they could buy content legally, but that it will likely invite America’s other major ISPs to join in.

On Monday, Variety reported that Comcast is exploring a new anti-piracy system. Under it, a person uploading pirated content using a peer-to-peer filesharing program—think BitTorrent with its default settings—would get a notification in their browser that what they’re doing is illegal.

That’s already the crux of the Copyright Alert System (CAS), a convoluted, heavily-criticized, system that went live in February after months of delays. Comcast and four other major ISPs are the founding members, along with corporate entertainment behemoths like the Motion Picture Association of America (MPAA) and Recording Industry Association of America (RIAA). The CAS flags users thought to be pirating material, with a series of escalating notices that can lead to repeat offenders getting their Internet connection temporarily slashed or severely slowed.

But Comcast, which also owns NBC and Universal Pictures, wants to go the extra mile. Under its proposed new system, trying to pirate certain content would redirect users to a place where they could buy or stream it legally.

The source also said that Comcast’s system followed the same underly philosophy that’s the backbone of the CAS: It’s not meant to stop hardcore pirates, but instead aimed to change the casual user’s habits.

Both Comcast and the director of the CAS have said that these two systems, though they seem to heavily overlap, would complement each other.

But it’s hard to ignore that this system is the initiative of a single ISP, that it awkwardly covers much of the same ground the CAS does, and that there’s reason to think that the CAS’s repeated delays were caused by internal disagreements between ISPs and content companies.

It’s possible that’s still the cause of strife. As Mike Masnick of Techdirt writes, Comcast’s proposed system “certainly sounds like something cooked up on the NBC Universal side of things.”

Regardless, implementation is still a long way off. The source refused to speculate on a timetable, and said the system hadn’t moved past preliminary discussions with programmers and engineers.