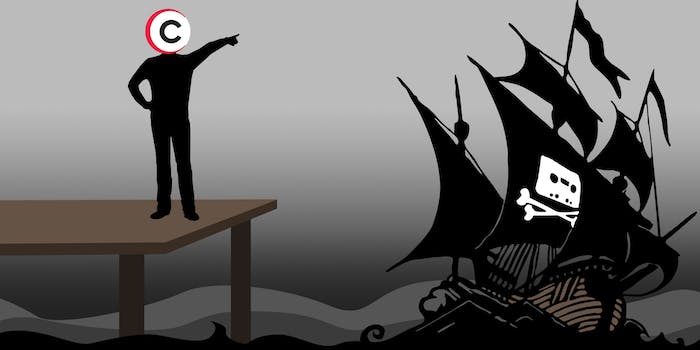 Comcast may take the copyright alert system into its own hands

Comcast, which owns Universal and NBC, is considering using browser popups to sell pirates on their goods legally.

What if, when caught downloading movies or music online, you weren’t reprimanded? And instead, your service provider redirected you to a place where you could buy that same content legally?

That’s the idea that Comcast is considering, according to a report from Variety. (Comcast didn’t give comment to either Variety or the Daily Dot.)

Currently, Comcast, along with the other four biggest Internet service providers in the U.S., is part of the “Six Strikes” program, formally known as the Copyright Alert System (CAS). Under it, users who are thought to be uploading content on a program like BitTorrent receive an escalating series of warnings. By their fifth and sixth one, they face various punishments, including temporary slowing or suspension of their service.

Comcast’s proposed system would seem to overlap quite a bit with the CAS, and possibly conflict with it. But they’re completely separate entities. Jill Lesser, who runs the CAS program through a corporate advocacy group called the Center for Copyright Information (CCI), told the Daily Dot in a statement that “the new Comcast anti-piracy program is not something that was developed through the CCI but we support efforts that further CCI’s mission.”

Lesser added that her organization: “supports efforts to address the important issue of online piracy through programs that are consistent with our core principles of building user awareness about copyright infringement and promoting user education about ways to find and enjoy copyrighted content legally.”

As Ars Technica notes, Comcast, unlike most ISPs, owns several major media outlets, including Universal Pictures and NBC. Presumably, it would have an easier time, and more motivation, to turn potential pirates into paying customers.

Variety reports that this proposed system, like the CAS, will be fully automated and will identify purported pirates by their Internet protocol (IP) addresses. But unlike the CAS, Comcast’s plan would work in real time. Users would see a pop-up message that notices they appear to be pirating files and offers links to get that material legally.

The CAS has received a host of criticism. Its implementation was repeatedly delayed, and its own board members have cited member organizations as not earning the public’s trust. Most damningly, its system to audit itself against falsely flagging innocent users was actually created by a firm that used to lobby for the record industry, which heavily pushed to get the CAS created in the first place.

Susan Jin Davis, Comcast Vice President of Communications (or a remarkably thorough impersonation of her) commented on the Variety story that the CAS “is an effective umbrella approach to address piracy, but we’re open to looking at a variety of ways to address piracy”

Davis, or her weirdly thorough impersonator, added that “Should we decide to go forward with this program, we view it as complementary.”

The confirmed-real Davis didn’t immediately respond to the Daily Dot’s calls to her work and cell phones to confirm her online identity.