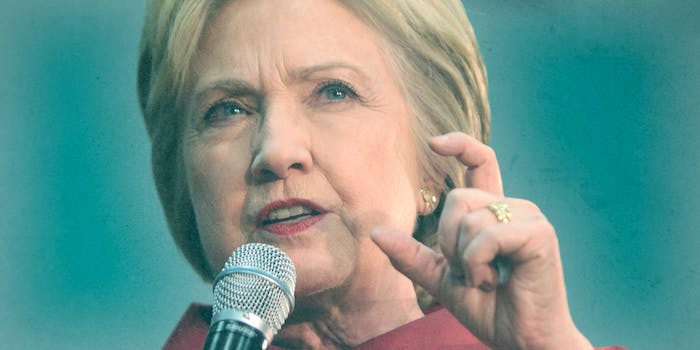 Hillary Clinton does not have an answer to the encryption question.

Hillary Clinton does not have an answer to the encryption question.

The presumptive Democratic presidential nominee released her technology agenda on Tuesday, revealing her vision for the future of the internet under a Clinton presidency.

When it comes to encryption, Clinton supported a presidential commission formally proposed in February by Sen. Mark Warner (D-Va.) and Rep. Michael McCaul (R-Texas). “This commission will work with the technology and public safety communities to address the needs of law enforcement, protect the privacy and security of all Americans that use technology, assess how innovation might point to new policy approaches, and advance our larger national security and global competitiveness interests,” Clinton’s technology agenda reads.

The Warner-McCaul commission—which would be made up of 16 members with a variety expertise on technology, business, and law enforcement—would address a range of civil liberties issues related to technology. Each party would select eight members to serve on the commission.

Digital-rights advocates, including the American Civil Liberties Union (ACLU) and the Electronic Frontier Foundation (EFF), have come out against the encryption commission.

“It’s the widely held consensus of countless computer scientists, technology companies, and national security experts that it is impossible to build a backdoor into encrypted products without compromising cyber security and privacy,” Neema Singh Guliani, legislative counsel with the ACLU, told the Daily Dot in December after Warner and McCaul first floated the commission idea. “We don’t need yet another commission to conclude, as the President’s Review Group has already done, that the U.S. government shouldn’t support policies that weaken encryption.”

Earlier in her campaign, Clinton called for a “Manhattan-like project” to break encryption and offer special backdoor access to government.

One key distinction left unsaid by Clinton is that, unlike the Manhattan Project, through which the United States developed its first nuclear weapons, the vast majority of technologists believe there is no way to offer backdoor access to encryption for government while maintaining high levels of cybersecurity.

In 2011, as secretary of state, Clinton was one of the world’s most forceful proponents of funding strong encryption technology. She argued that the technology promoted freedom around the world despite the threats posed by terrorist users not unlike those seen today.

Donald Trump, the presumptive Republican nominee, has offered loud proclamations but no real specifics. Trump urged a boycott of Apple over their refusal to unlock a terrorist’s phone, for instance, and then he continued to use Apple products.

In Congress, the issue of encryption reared its head once again when Sen. Richard Burr (R-N.C.), chairman of the Senate Intelligence committee, focused on the issue in this weekend’s Republican Party weekly address.

Burr warned that “laws that were enacted to provide authorities and capabilities to our law enforcement and intelligence community agencies are out of date, stale and in some cases, no longer applicable.”

He said the Islamic State is using encrypted apps to plan attacks, which he cited as another reason to act. The Islamic State’s technology arm, known as Afaaq Electronic Foundation (AEF), has issued advice for how ISIS militants can use secure messaging apps.

Burr and Sen. Dianne Feinstein (D-Calif.) introduced a bill guaranteeing special backdoor access to encryption for government this year, but the rest of Congress has so far has been silent, giving the legislation little chance of passing. Burr’s address may signal a renewed push for action on encryption in Congress.