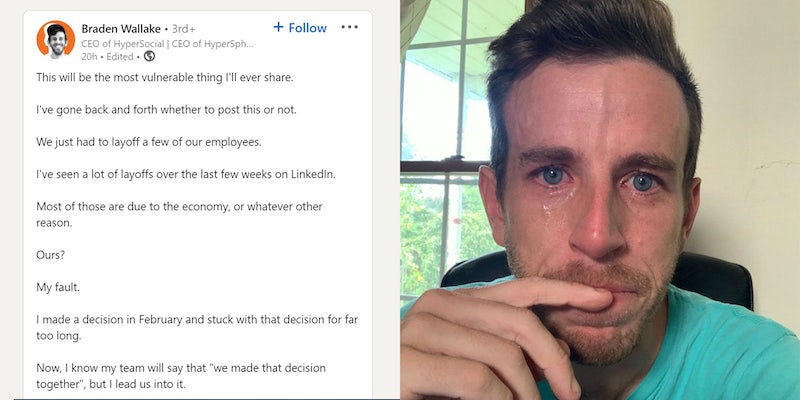 ‘How do I make this about me?’: CEO posts crying selfie after laying-off his employees on LinkedIn

A marketing CEO is being roasted for posting a picture of him in tears on LinkedIn after laying off employees, calling it the lowest moment he can think of.

Braden Wallake, CEO of B2B Marketing company HyperSocial, posted on Tuesday that he had to layoff some employees because of decisions he made for the business.

“I made a decision in February and stuck with that decision for far too long,” he said in the post. “Now, I know my team will say that ‘we made that decision together’, but I lead us into it. And because of those failings, I had to do today, the toughest thing I’ve ever had to do.”

The post made its way to the popular subreddit Antiwork, where users were less than kind to Wallake.

“I’ve cried more real tears by drinking a carbonated drink and burping with my mouth closed,” one redditor said.

One commenter accused Wallake of pulling a media stunt.

“Sorry but tears dont pay the bills,” they wrote. “You can fire someone without being a dick about it, especially when its because the company is going down.”

Other users called for the CEO to take a paycut rather than lay off employees, but the Wallake said in the comments of his original post that he eliminated his salary prior to the layoffs.

In a follow-up post on Wednesday, Wallake said he didn’t intend to victimize himself in his original post, and that he intends to use his platform to help people find work. He encouraged people to comment on the updated post with their resumes and job titles, and encouraged employees to comb through the replies to find solid employees.

Still, redditors were ruthless in their critiques of Wallake.

“Crocodile tears over the many hard workers that were underpaid,” one said.

We’ve reached out to Wallake.