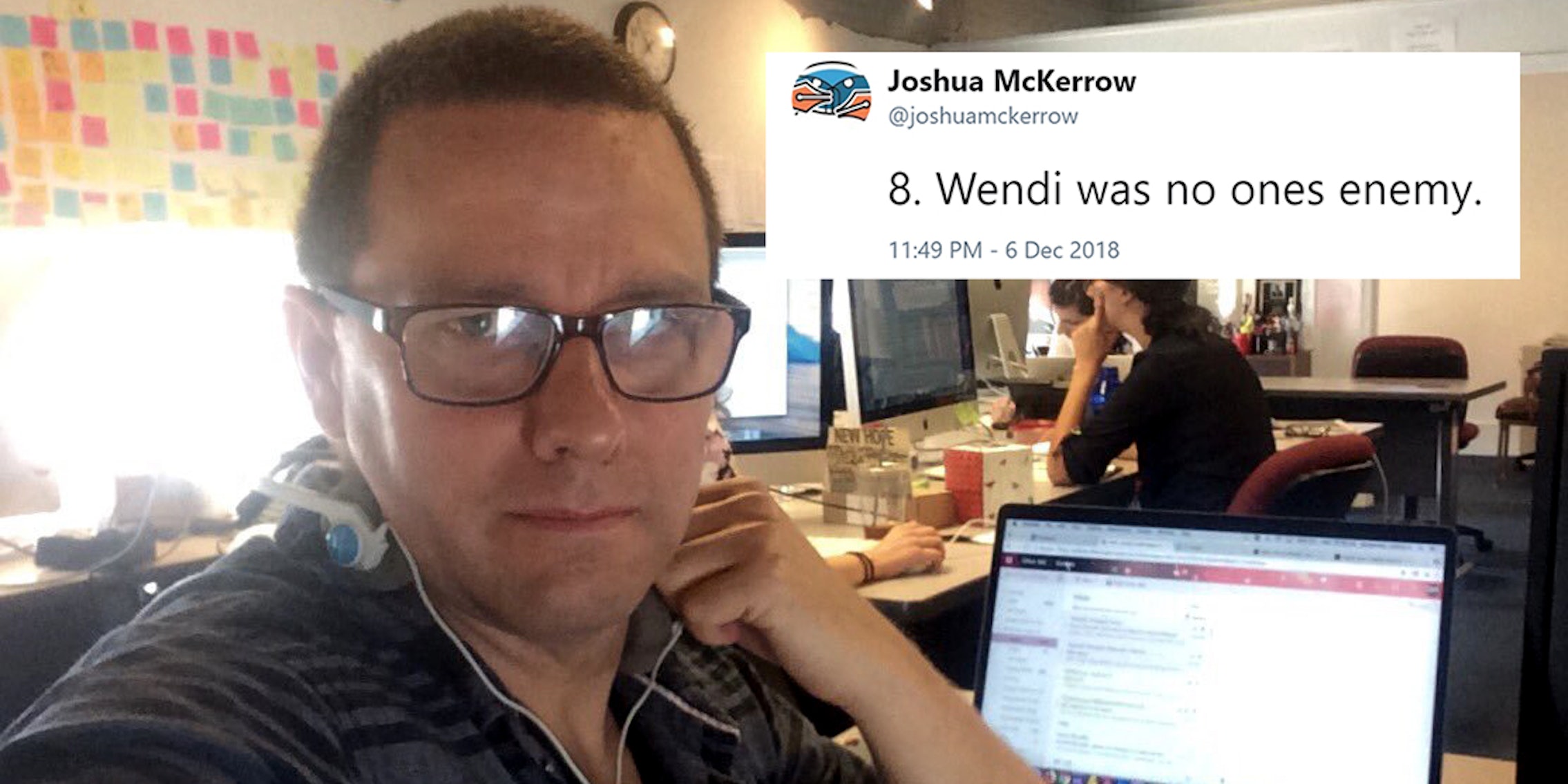 Joshua McKerrow lost his friend in the Capital Gazette shooting.

President Donald Trump launched into one of his seemingly unprompted attacks on the media late Thursday, calling, as he usually does, “FAKE NEWS” the “ENEMY OF THE PEOPLE.”

FAKE NEWS – THE ENEMY OF THE PEOPLE!

People have been warning that Trump’s rhetoric against the media is a dangerous call to action. And in response to Trump’s tweet last night, a journalist who lost his a colleague in one of the worst newsroom massacres in American history, the Capital Gazette shooting in Annapolis, Maryland, spoke out against Trump’s tweets.

Joshua McKerrow tweeted about his annual trip to cover the holiday decorations at the Maryland governor’s mansion, which he always made with his co-worker, Wendi Winters.

Winters was one of five journalists lost in the shooting, and McKerrow spoke of being overcome with emotion at the typically joyous event.

“I really thought I could hold it together. I moved through the rooms with my tripod, focusing on the trees and ornaments. All I could think about was Wendi. I feel like she was with me, that she was actually present,” he tweeted, before later adding: “Wendi was no ones enemy.”

1. Today I did the annual story on holiday decorations at the Governor's residence. I've done it every year, for years. A very light but very fun story. Every year my reporting partner was Wendi Winters. This year, it was Selene. Wendi was murdered in June. https://t.co/hDlixzieht

2. Selene did a great job, of course. And I really thought I could hold it together. I moved through the rooms with my tripod, focusing on the trees and ornaments. All I could think about was Wendi. I felt like she was with me, that she was actually present.

3. Not in a "ghost" sense, I hope she has moved on to a better world then Capital feature stories : ) But she was there in my mind. I could almost hear her voice echoing through the empty rooms. "How many cookies are you making this year?", her favorite question..

4. I was ok til the very end. Interviewed the butler, like I have every year, and when we were done she took me aside and whispered, "I really miss Wendi. Next year I'm going to name a cookie for her."

5. And that was it. The tears started, and I'm standing in the Maryland Governors home weeping to myself about my dead friend. She died in The Capital newsroom on June 28th, shot by a man who wanted to kill every journalist he could.

The gunman in the Capital Gazette shooting was upset about the paper’s coverage of his criminal harassment case and carried a vendetta against the paper for its reporting.

8. Wendi was no ones enemy.

In the wake of the shooting, the president initially refused to lower the American flag at the White House to half-mast before relenting to honor the slain journalists.