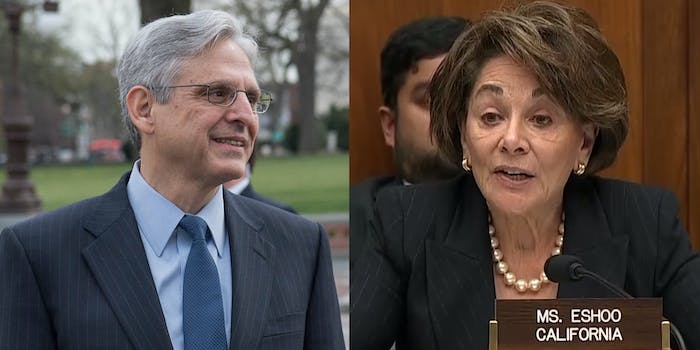 The lawmakers note that time is of the essence for the Biden DOJ.

A group of a dozen members of Congress from California is calling on Vice President-elect Joe Biden’s attorney general pick Merrick Garland to withdraw from a federal lawsuit targeting California’s net neutrality law that has been pushed by the Trump administration.

Over the summer, the Trump Department of Justice restarted its attempt to block California from implementing its net neutrality law, which has been hailed as a “gold standard” for other states to follow because it goes beyond what the Federal Communications Commission’s (FCC) 2015 Open Internet Order did in establishing net neutrality rules.

California’s law was passed in 2018 following the FCC’s repeal of net neutrality rules. It was nearly immediately hit with a lawsuit from the Department of Justice and was later joined by groups representing telecom companies. The two sides agreed to halt enforcement of the law until the conclusion of a lawsuit that challenged the repeal.

That case, Mozilla v. FCC, was settled in 2019. A panel of three judges from the United States Court of Appeals District of Columbia Circuit largely upheld the FCC’s repeal but vacated a portion of it that blocked states from enacting their own laws.

That decision kickstarted the renewed fight over California’s net neutrality law. The Justice Department is arguing that the law is “preempted by federal law and therefore violates the Supremacy Clause of the United States Constitution.” In October, more than two dozen tech advocacy groups filed briefs in support of California’s law.

With Biden’s election win over President Donald Trump, it will usher in new leadership at the Justice Department, and members of Congress from California are hoping that will mean it will drop support for the suit targeting their state’s net neutrality law.

Rep. Anna Eshoo (D-Calif.), a vocal supporter of net neutrality, spearheaded the effort to ask Garland to withdraw from the lawsuit. She was joined by 12 other lawmakers.

“We urge the new Department of Justice to withdraw from the
U.S. federal government’s lawsuit against the State of California over its net neutrality law as one of the first actions after inauguration,” the lawmakers wrote in their letter to Garland.

As the lawmakers note in their letter, a hearing for the lawsuit is scheduled for Jan. 26, just a few days after Biden’s inauguration—making it necessary that a potential withdrawal from the case is an early decision for the new Justice Department.