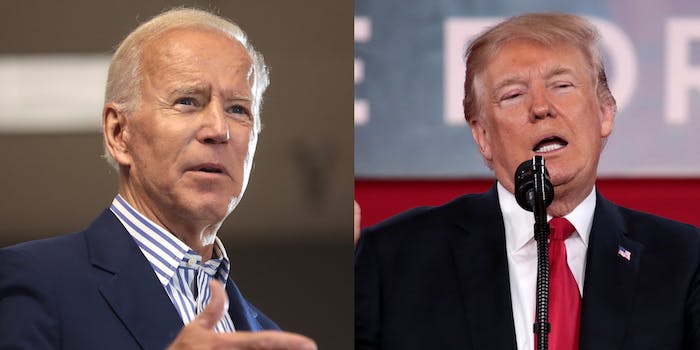 This isn't the first time the Biden campaign has pushed the social media giants on Trump posts.

Joe Biden’s 2020 campaign is pushing Facebook and Twitter to remove posts made by President Donald Trump about mail-in voting, according to a new report.

Reuters reports that the Biden campaign asked the two social media giants to remove posts Trump made on Monday regarding mail-in ballots, an issue the president has railed against repeatedly.

On Monday, the president tweeted four times about mail-in ballots, including one where he linked them to the ongoing protests against police brutality and racism (which he likened to creating “all sorts of havoc.”)

“If people can go out and protest, riot, break into stores, and create all sorts of havoc, they can also go out and VOTE—and keep our Election Honest. With millions of mail-in ballots being sent out, who knows where they are going, and to whom?” Trump tweeted.

In other tweets, he said mail-in ballots would lead to a “rigged election” and linked to a story about Attorney General William Barr saying that ballots “opens the floodgates to fraud.”

The same remarks were also posted on his Facebook page.

A spokesperson for the Biden campaign told Reuters it sent letters to Facebook and Twitter about the posts because they pushed “baseless conspiracy theories meant to discredit vote-by-mail.”

Both social media giants told the news outlet the posts from the president did not violate their rules.

While Twitter has taken action against Trump’s posts in the past (including about mail-in ballots), Facebook has been criticized for being much more lenient with posts made on their platform.

Earlier this month, the Biden campaign published an open letter to Facebook asking CEO Mark Zuckerberg to “use its platform to improve American democracy rather than as a tool to spread disinformation that undermines our elections.”

The company essentially brushed him off.