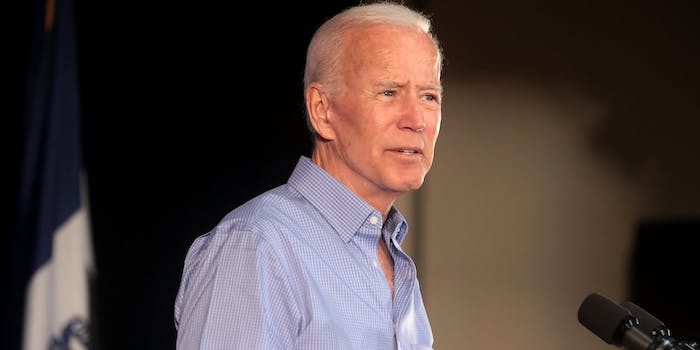 The former vice president published an open letter to Facebook CEO Mark Zuckerberg on Thursday, calling on the company to “use its platform to improve American democracy rather than as a tool to spread disinformation that undermines our elections.”

“We call for Facebook to proactively stem the tide of false information by no longer amplifying untrustworthy content and promptly fact-checking election-related material that goes viral,” the letter continues.

It goes on to demand mandatory fact-checking for “all political advertisements” in the two weeks leading up to the election and “clear rules” prohibiting “threatening behavior and lies” about participating in the vote.

Biden has since shared the letter widely on social media—yes, including on Facebook—asking supporters to sign on and use the hashtag #MoveFastFixIt.

According to the New York Times, Biden’s campaign has been in touch with the platform for months, attempting to push for reform privately.

The choice to go public with the demands follows weeks of debate over the role of social media platforms as fact-checkers, which has pit Twitter and Facebook on opposite ends.

As someone who has been on the receiving end of Twitter’s new disinformation policy, President Donald Trump has made his stance abundantly clear. The president has claimed attempts to flag his social media posts for inaccuracies or inciting violence amounted to “stifling free speech.”

The president then signed an executive order threatening action against social media sites if they show political bias, though experts are doubtful it will hold up in court.

In Facebook’s response to Biden’s letter, the company pointed to the president’s actions, saying: “We live in a democracy, where the elected officials decide the rules around campaigns. Two weeks ago the President of the United States issued an executive order directing Federal agencies to prevent social media sites from engaging in activities like fact-checking political statements.”

Noting that Biden’s letter was asking them to do the “exact opposite,” Facebook pledged to pretty much ignore him—unless he wins in November.

“Just as they have done with broadcast networks—where the US government prohibits rejecting politicians’ campaign ads—the people’s elected representatives should set the rules, and we will follow them,” Facebook’s statement concluded. “There is an election coming in November and we will protect political speech, even when we strongly disagree with it.”