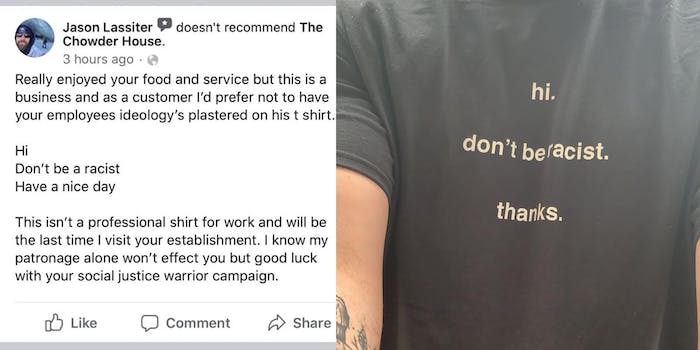 He was roasted into deleting the review.

A customer is boycotting a restaurant because his server wore a shirt that reads: “hi. don’t be racist. thanks.”

Jason Lassiter expressed his discontent in a review for the Chowder House, saying that while he enjoyed the food and service, “as a customer I’d prefer not to have your employees ideology’s plastered on his t shirt.”

“This isn’t a professional shirt for work and will be the last time I visit your establishment. I know my patronage alone won’t effect you but good luck with your social warrior campaign,” Lassiter wrote.

The person who served him, known as @bryantinak on Twitter, tweeted a screenshot of the customer’s review along with a photo of the shirt they wore that day. The viral tweet has nearly 100,000 likes and more than 17,000 retweets.

The man who left the negative review was roasted so hard on Facebook that he eventually deleted the review, @bryantinak said.

Though @bryantinak originally posted that his bosses wouldn’t allow him to wear his favorite shirt anymore, it was actually just a misunderstanding.

“They have no problem with me wearing the shirt and actually urge me to continue to if I wish to do so,” the tweet reads.

Not only did his bosses encourage him to keep wearing it, but they also ordered several of the same shirt so that everyone in the restaurant could have one.

“Stay tuned for a group pic in a few weeks when they come in,” @bryantinak wrote.

Replies to the thread were overwhelmingly in support of the server. People questioned why anybody who’s not racist would have a problem with the shirt.

One person argued the shirt was actually peak professional.

“That’s actually an extremely professional shirt. it even says have a nice day. how much more professional can you get,” @Chinchillazllla tweeted.

Well, there’s only one way to end this:

bye. don’t be racist. thanks.