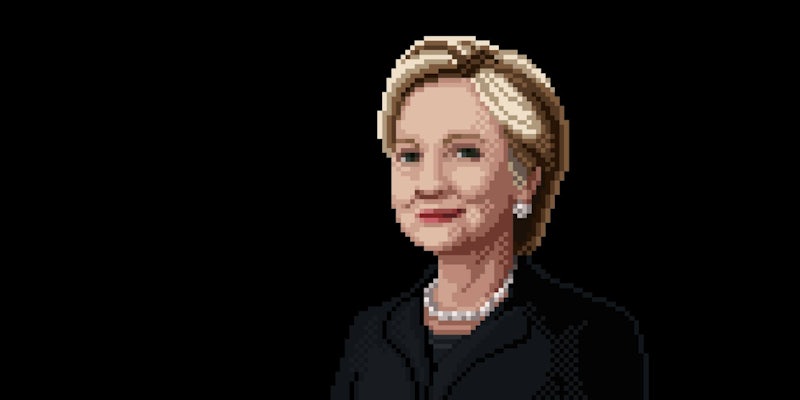 In a six-minute speech at the Republican National Convention on Tuesday, Carson began by claiming he was against political correctness and then used Clinton’s college thesis to argue that the former senator and secretary of state shouldn’t be president because she acknowledges the devil himself.

“Now, one of the things that I have learned about Hillary Clinton is that one of her heroes, her mentors was Saul Alinsky,” Carson, who was reading off script, said. “And her senior thesis was about Saul Alinsky. This was someone she greatly admired. And let me tell you something about Saul Alinsky. So he wrote a book called Rules for Radicals. It acknowledges Lucifer, the original radical who gained his own kingdom.”

Carson then asked those at the convention if they were willing to elect Clinton given her relationship to Alinsky.

“This is our nation where our founding document, the Declaration of Independence, talks about certain inalienable rights that come from our creator; a nation where our Pledge of Allegiance says we are one nation under God,” Carson said. “This is a nation where every coin in our pockets and every bill in our wallet says ‘In God We Trust.’ So are we willing to elect someone as president who has as their role model somebody who acknowledges Lucifer?”

On Wednesday morning, CNN anchor Chris Cuomo pressed Carson on his speech, asking the former presidential candidate why he was “so heavy-handed” on trying to tie Clinton to Lucifer and why Carson criticized Clinton for something she wrote 47 years ago.

“In the real world, and particularly in business, if someone is doing something that is inappropriate, what you do is you maybe give them remedial training or you demote them,” Carson replied. “Instead of sending her for remedial training and demoting her, they’re saying, let’s promote her to the highest position in the land.”

Carson, a devout Christian, continued his criticism of Clinton, saying she supports abortion (“killing babies,” as Carson says) and gay marriage (“redefining marriage away from what the biblical definition is.”)

According to PoliFact, however, Alinsky’s book, Rules for Radicals: A Practical Primer for Realistic Radicals, came out in 1971, two years after Clinton’s thesis. And while the book included an opening blurb on Lucifer, the rest of the novel does not discuss Satan nor Lucifer.

In her 2003 memoir Living History Clinton herself also says that she and Alinsky had “fundamental disagreements.”

“Alinsky was a colorful and controversial figure who managed to offend almost everyone during his long career,” Clinton said. “His prescription for social change required grassroots organizing that taught people to help themselves by confronting government and corporations to obtain the resources and power to improve their lives. I agreed with some of Alinsky’s ideas, particularly the value of empowering people to help themselves. But we had a fundamental disagreement. He believed you could change the system only from the outside. I didn’t.