Apple leads stock-market recovery, but Tim Cook might have broken an SEC rule

Tech investors have had quite a ride today.

After opening with a sharp dive that sent panic through the financial sector, several of the largest tech stocks bounced back from their depths Monday afternoon to finish the day strong.

Apple, Facebook, Google, Microsoft, and Twitter, like many other firms, began the trading day with huge losses. Their stock drops were part of an overall downward trend that began last week after China’s Shanghai Composite Index began to decline. Many tech stocks, in particular, were hit hard due to their big bets on Chinese growth.

In the latest indication of China’s substantial importance to Apple, CEO Tim Cook emailed Jim Cramer, the host of CNBC’s Mad Money, to provide additional context to reports about Apple’s growth in the country. Offering this type of financial guidance outside of a quarterly earnings report is atypical of most CEOs, let alone the generally reserved Cook, but he evidently felt the need to calm fears of a serious market crash.

Whether it was Cook’s reassuring words or Wall Street collectively deciding to calm down, tech stocks began to claw out of their hole shortly after Monday’s dismal opening.

By midday, Apple and its fellow tech giants had regained the majority of their early losses. Apple even managed to show a slight gain at first, though it later dipped back below its opening figure. 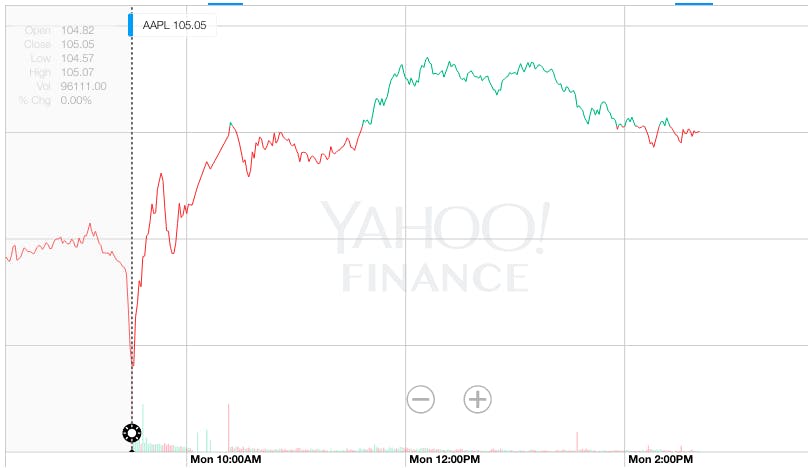 As much as Cook’s email seemed to reassure investors, some Wall Street observers have claimed that he might have inadvertently violated the Securities and Exchange Commission’s Fair Disclosure regulations, which are to prevent companies from selectively sharing internal information that could affect trading decisions with select parties to give them a competitive advantage.

Buying or selling a stock based on nonpublic information, a practice known as insider trading, is illegal in the United States. Finance experts are now questioning whether Cook’s private email to Cramer, who co-manages a stock portfolio with TheStreet’s Jack Mohr, violated SEC rules.