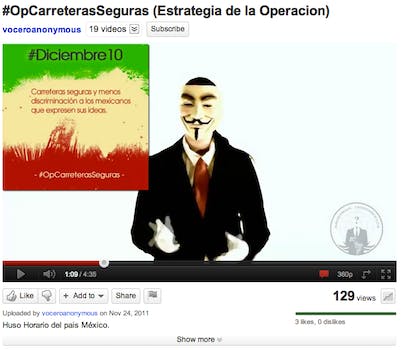 After two campaigns in Mexico that were better publicized than executed, Anonymous has launched #Opcarreterasseguras to draw attention to bus companies that the hackers claim are tied to the violent drug cartels.

The hacker group Anonymous launched #Opcarreterasseguras (Operation Safe Roads in English) in its latest bid to draw attention to violence in Mexico and Latin America.

In a press release and video, the group said the action will target bus companies and begin on Dec. 10. The goal is to call attention “to the thousands of kidnappings, murders and rapes that bus passenger fall prey to by organized crime elements on Mexican highways.”

Last month, Anonymous made headlines when it said it would go after the notoriously violent drug cartels that have been waging a decade-long war in Mexico. Anonymous eventually called off that attack, making a widely disputed claim that the Los Zetas drug cartel had released a kidnapped Anonymous member. It then launched #OpCorrupcion, targeting the Mexican government for corruption that has allowed the drug gangs to flourish.

The latest salvo seems to draw Anonymous even further away from the killing of four people who posted information about the cartels on online forums, which was the issue that initially drew Anonymous’ attention to Mexico.

“Although we realize that Mexico is facing a current crises, derived from its own internal issues, this does not dissolve the responsibility of the Federal Government and the Bus Companies from protecting those passengers that travel on its highways,” stated the Anonymous press release. “The insurance companies that service the bus industry is also a culprit in this particular situation.”

It also noted that a member with the Twitter username @SpyPeople would be the “team leader” of #Opcarreterasseguras.

“Kidnapping is a problem in Mexico, but it is not our biggest problem,” said a Mexican social media user who has been observing the increased activity of Anonymous in Mexico. “These most recent actions have drawn attention away from the biggest problem, which is the cartels and the drugs and the war. This is a very real war with very real casualties being fought on the streets, but if you pay too much attention to them [Anonymous], you may think it’s simply being fought on the Internet.”

Accurate crime statistics in Mexico are difficult to obtain, but anecdotal evidence suggest that kidnapping both by drug cartels and smaller, vigilante gangs has increased in the past five years. In its press release, Anonymous provides links to some case studies about specific crimes, but it is unclear where the “thousands” number comes from.

“They get on the bus, take the men for ransom or to integrate them into their criminal organization,” someone claiming to be an Anonymous spokesperson told Action 4 News in Laredo, Texas. “The women are raped and then kidnapped to work in brothels. The evidence is here.”