Amazon Prime adds another notch to its belt with offline video

New feature joins a list that already includes... wait... you can do all this stuff with Amazon Prime? Really?

The standard response we hear, when somebody’s asked why they subscribe to Amazon Prime, is “Ugh… it pays for itself with the shipping discounts.” It must frustrate Amazon when Netflix continues to dominate the streaming market, all the while tweets like these continue:

But Amazon is doing great stuff with Prime—and now it’s added offline video to Prime’s ever-growing list of features, which is something that Netflix stated, last December, was “never going to happen” on its service. 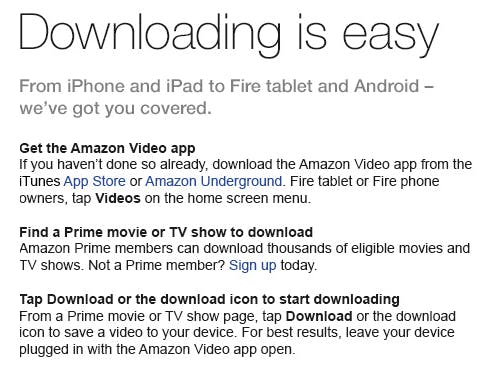 Starting immediately Prime subscribers will be able to download any of their streaming videos (which includes exclusive HBO content), to whatever device they’re logged in on, and watch them later. This is big news to people that enjoy watching films inside of caves, and for parents whose cars lack Wi-Fi, but are in dire need of distractions for their children in the back seat. 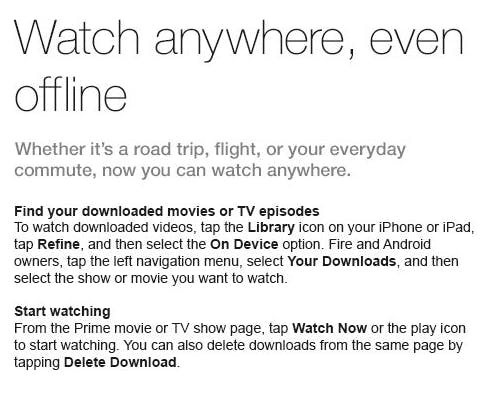 Offline video viewing joins Prime Music (which allows ad-free access to more than a million songs for no additional charge), the aforementioned HBO content, original shows that include quality stuff like Transparent, and unlimited photo storage. Oh, and of course the free two-day shipping. And that’s for $8.25 a month.

At some point in the future, the world’s collective conscious will suddenly recognize what Amazon Prime has to offer, and Netflix might find be in trouble. Until then, Amazon will remain confused as to why people are only subscribing to Prime for the free shipping.