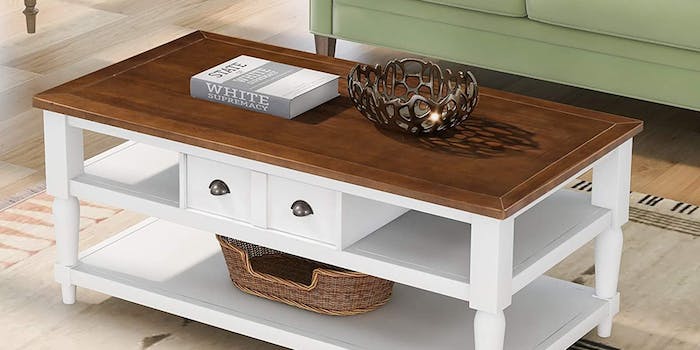 It's on multiple coffee tables.

An Amazon listing for a wooden coffee table includes a preview image of the item complete with a book titled “White Supremacy.”

In footage uploaded to TikTok on Monday, user @jojobrwn pointed out the book in a mockup picture of the $159 table.

Users were quick to weigh in on the perplexing image, with some suggesting nefarious intent on behalf of the seller.

“It’s not even a real book,” @boot.lavato wrote. “They could have made it anything.”

The listing, however, appears to have caught the attention of Amazon. The TikTok user commented on early Tuesday that the listing was no longer available.

Despite the removal, other listings appear to feature the book as well. A nearly identical item selling for $117, known as the SSLine Wooden Coffee Table, also included the book in its mockup images.

Yet the second image has been horizontally flipped, making the book’s title appear backward. It remains unclear if the image was purposely altered in order to obscure the book’s title.

The company behind the item is listed as Baseone. Further company details include a Chinese-language description as well as a Chinese address, although the item is allegedly made in Vietnam.

Even though the table comes in multiple colors, only the white version is shown with the book.

The Daily Dot reached out to Amazon to inquire about the listing but did not receive a reply by press time.

Update 10:32am CT, Sept. 8: The book featured in the coffee table listing, “State of White Supremacy: Racism, Governance, and the United States,” is a real book surrounding anti-racism.