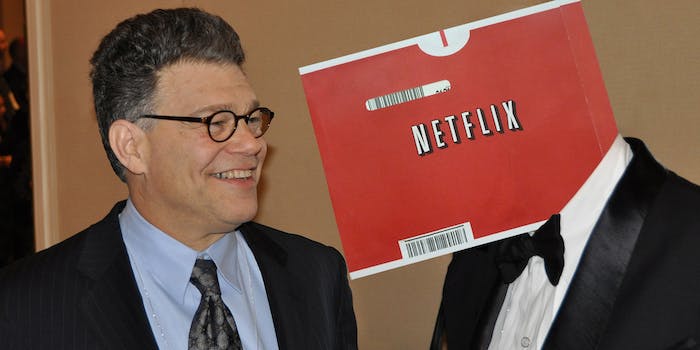 Are you listening, Reed Hastings?

A U.S. Senator and former “Saturday Night Live” cast member is attempting to team up with Netflix to block the merger of cable and Internet provider giants Comcast and Time Warner Cable.

Sen. Al Franken (D-Minn.) said he is “not convinced” by Comcast and Time Warner assurances that the merger will be good for customers. In an effort to block the deal, Franken invited Netflix CEO Reed Hastings to submit the company’s perspective on the matter in a letter sent (and posted to Franken’s website) Wednesday.

The merger “would give Comcast both the power and the incentive to act as gatekeeper on the Internet, raising costs and limiting choices for consumers” Franken wrote.

Posturing the letter for public release, Franken pointed out a number of facts that Hastings most likely knows already. Namely, that Comcast and Netflix are, in many ways, “rivals” since Comcast not only provides content to customers but also produces it.

Comcast, in 2011, acquired NBCUniversal and its portfolio of networks such as NBC, MSNBC, Telemundo, USA and more.

Franken also echoed the often-stated fact that Comcast would be the Internet provider for about 40 percent of American households if the merger goes through.

With the status of net neutrality rules in flux, Franken and advocates for an open Internet worry that having one company control so much of the broadband market would be a dangerous proposition, because that company could extract payments from content providers like Netflix for delivering data to customers. In turn, the rising costs for content providers could be passed on to customers.

Earlier this month, a coalition of 50 advocacy groups petitioned FCC Chairman Tom Wheeler and Attorney General Eric Holder to block the merger because it would decrease the spirit of competition that has made the Internet a vehicle for innovation.

Comcast has countered by pointing out that it currently doesn’t overlap with Time Warner in the areas the companies serve, so customers in those areas will not technically have fewer provider options than before.

In addition, Comcast has positioned itself as a supporter of net neutrality. Even if it wasn’t, the company says that, due to the terms of its 2011 acquisition of NBCUniversial, it is the only Internet provider still legally bound to the FCC’s former net neutrality rules that a D.C. appeals court struck down in January.

For the merger to be approved, the Department of Justice must conduct an antitrust review, and the Federal Communication Commission must decide it’s in the public interest.

Comcast and Time Warner officials discussed the merger before the Senate Judiciary Committee, on which Franken sits, in an April 9 hearing. Franken has been a U.S. senator since 2011, but he has a much longer history in media. He was a writer and cast member of “Saturday Night Live,” when the show started in 1975, and he has written and acted in numerous other movies and TV shows.

Franken’s full letter to Netflix is copied below.

H/T The Verge | Photo by veni markovski remix by Jason Reed (CC BY 2.0)