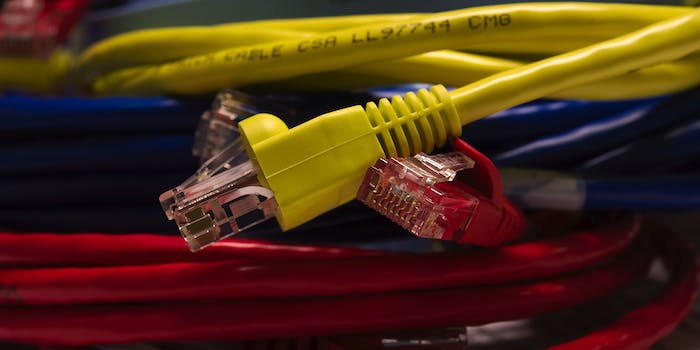 Two Internet-providing giants are trying to drum up support for their potential marriage by saying the arrangement will ultimately protect the rights of digital small folk.

As Comcast pushes for regulatory approval for its $45.2 billion merger with Time Warner Cable (TWC), the company is touting its supposed commitment to net neutrality to the Federal Communications Commission (FCC), the agency whose leader is currently rewriting rules in attempt to maintain an open Internet in the wake of a controversial court decision.

In attempt to show that the merger would be in the public’s interest, Comcast filed a 175-page statement to the FCC on Tuesday. The company posted the statement on its website, along with a shorter blog post outlining the points made in the statement.

“Today, Comcast is the only company in America that is legally bound by the FCC’s now vacated Open Internet rules,” the post reads. “We’ll extend those protections to customers in TWC areas.”

At the moment, no other companies are legally bound to net neutrality rules, which dictate that Internet service providers must treat all Internet traffic equally.

In January, the D.C. Court of Appeals ruled in favor of Verizon and against the FCC in a landmark decision that struck down parts of the FCC rules that previously required Internet providers to adhere to net neutrality principles. Comcast, in Tuesday’s FCC filing, explained that it is still bound by the FCC’s old rules, however, because of the terms of its 2011 acquisition of NBCUniversial. The company said the 2011 deal was intended to be a “fail-safe” for the FCC to ensure Comcast would adhere to net neutrality rules “even if they were overturned by a court.”

FCC Chairman Tom Wheeler, a supporter of net neutrality, said in February that he plans to push for a litany of new rules to buttress open Internet principles across the industry.

Many questioned Comcast’s commitment to net neutrality as recently as February, when the company struck a deal with Netflix, which agreed to pay for smoother deliverance of its streaming video data to customers. Though the exact terms of the deal were not disclosed, Comcast called it a “market-based solution to [the companies’] interconnection issues” and said it had nothing to do with net neutrality.

Net neutrality is also the first reason Comcast offers for how the merger “will make life online better for more people,” in a commercial released Monday. Comcast has also said that combining the two companies’ resources will benefit customers by accelerating innovation.

Not everyone has such a rosy view of the potential merger. A coalition of more than 50 advocacy groups implored FCC Chairman Tom Wheeler and Attorney General Eric Holder to squelch the deal, in a letter sent Tuesday. The coalition wrote that combining the two largest cable and Internet companies would decrease competition in a way that’s detrimental to public interest.

“The Comcast-Time Warner Cable merger would give Comcast unthinkable gatekeeper power over our commercial, social and civic lives,” the letter reads. “Everyone from the biggest business to the smallest startup, from elected officials to everyday people, would have to cross through Comcast’s gates.”

Comcast has attempted to counter this argument by pointing out that Comcast and Time Warner currently do not overlap in the areas they serve, so people would technically have the same number of choices.

For the deal to be approved, the Department of Justice must conduct an antitrust review and the FCC must decide it’s in the public interest. Comcast said it filed the necessary paperwork with the DoJ last week.

“However, the 180 day ‘shot clock’ is a guideline, not a requirement,” Wigfield told the Daily Dot in an email. “The clock can be stopped if the staff’s review is delayed for reasons outside the FCC’s control.”

The full statement Comcast sent to the FCC on Tuesday is embedded below.