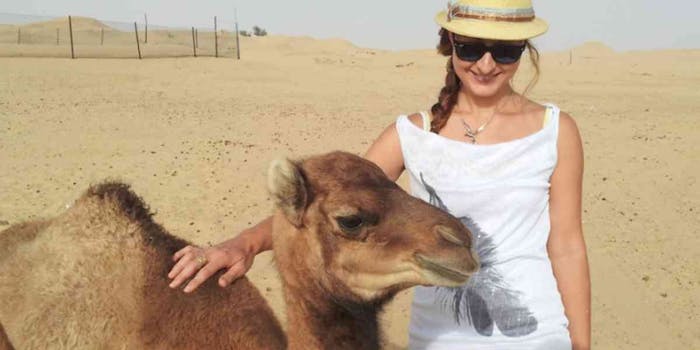 She's in jail for 'writing bad words about a person.'

Case in point: 39-year-old Australian tourist Jodi Magi, who was convicted this month by the authorities in the United Arab Emirate capital of Abu Dhabi for a photo and caption she posted on her Facebook account.

The crime? Magi had posted a photo of a car parked across not one but two disabled parking spaces.

“I’m putting my life in the hands of chaos. I’m terrified.”

Australian broadcaster ABC reported that while in custody, Magi, a painter and illustrator who has lived in the UAE since 2012, “was forced to sign multiple documents in Arabic without any translation.”

By posting the photo, she was found guilty of “writing bad words about a person.” This, despite the fact that she had obscured the plate number of the car in question.

Magi showed up at the court to pay the fine associated with the offense, the equivalent of about $2,700, but instead of being allowed to do so, the authorities hauled her away to prison in a police van, even though her sentence contained no jail time.

“I’m putting my life in the hands of chaos,” Magi told ABC before her arrest. “I’m terrified.”

Magi told the ABC reporter that the Australian embassy had not provided her with any help her at all, telling her only that she should get a lawyer.

“I’m not sure if it was me being naive. I was under the impression that embassies were in countries to help their citizens in times of difficulty,” she said. “But from my experience it seems that their job here seems to be to generate business, and they have no interest in anything other than that.”

On Tuesday, Australian Foreign Minister Julie Bishop warned travelers to be aware of local laws before visiting foreign countries. Bishop also said that she expects Magi will be deported back to Australia soon.

An expert in free-speech issues in the Gulf States, who spoke on condition of anonymity, told the Daily Dot, that this situation reflects how far the UAE authorities are taking the cybercrime laws limiting free expression on the Internet, which the country passed in late 2012.

“They’re trying to pin these down on ‘social cases’ and ‘protecting privacy,’ but this is really just a way for them to engage in widespread censorship of political content,” the expert, who requested anonymity due to potential threats of violence for speaking out on these issues, said. “Even LGBT content is strictly prohibited, and many LGBT-related results are omitted from Google and Bing search results, and most sites with ‘gay’ or ‘lesbian’ in the URL are restricted.

“It’s a huge concern not just for the UAE but for all of us in the [Gulf States]. It’s becoming standard to imprison, detain, and charge people for posting even the mildest forms of criticism.”

Freedom House, an international civil-liberties watchdog, has consistently rated the UAE in the bottom quarter of its rankings when it comes to freedom of expression (with a score of 4 out of 16), rule of law (3 out of 16), and individual rights (4 out of 16).

In 2013, Electronic Frontier Foundation reported that at least two other people were arrested for expressing interest in human-rights issues in the UAE on their Twitter accounts.