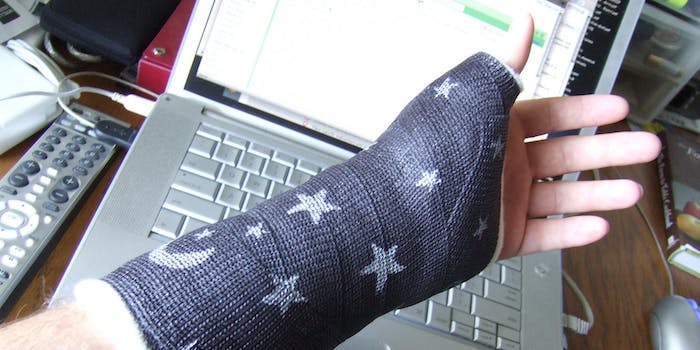 It's definitely cooler than grabbing a red Sharpie.

Remember how fun it was to sign your friend’s casts when they broke their arms? Well that’s about to become a whole lot more fun. Or maybe complicated. There is now a cast that you can “sign” via the Internet and 3D printing.

Oakland, Calif.-based company FATHOM has demonstrated the ability to build a cast by meshing together 3D-printed text. If this technique comes to market, it will let injured people select tweets and Facebook posts to literally embed in the cast. Naturally, the project has a trendy-sounding name: #CAST, pronounced “Hash Cast.”

“Using the #CAST mobile app, users can approve or reject personalized messages collected through their preferred social networks,” FATHOM explains on its website. “Once the maximum amount of characters allowed are approved by the user, a custom fit design is generated and built then delivered to their medical facility and fitted on the user by a specialist.”

“Once the design has been fully customized and is ready to print, FATHOM prints it using its selective laser sintering (SLS) 3D printers,” writes Shanie Phillips of Inside3DP.com.

Unfortunately, FATHOM’s breathable-nylon #CASTs are not yet available. The project was put forward as a proof of concept to showcase the company’s technology. Inside3DP notes that FATHOM is interested in connecting with hospitals and doctors to turn the concept into reality.

Ava DeCapri, an industrial designer at FATHOM, told Inside3DP, “Anyone from anywhere in the world can [now] ‘sign’ a person’s cast. It has the potential to not only heal your arm more efficiently, but also uplift your spirits.”