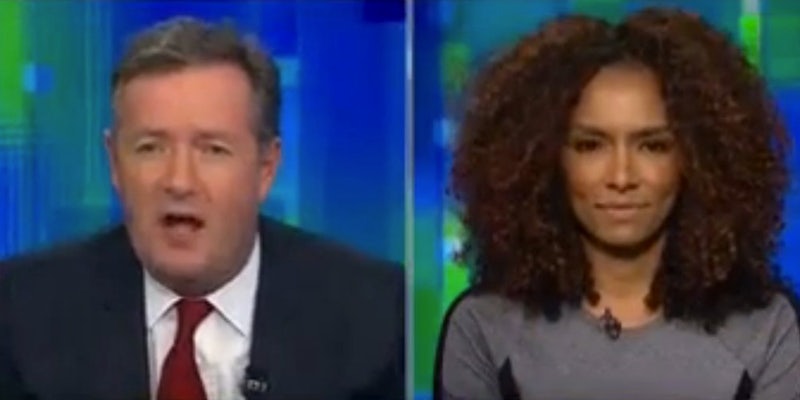 From Piers Morgan to Stephen Colbert: How Janet Mock is redefining history

The media’s treatment of and engagement with trans people is now moving in another direction, and we are in the middle of a historic moment that will be looked back upon and recognized as a turning point.

It’s worth bearing in mind from the outset that historic moments are greater than their actors. History seizes upon some often singular aspect of a person or time. It uses them to tell a story, a story that exists in a way that no individual in their inevitably contradictory complexity can. Making history requires more than a person. It demands the right person, with the right story, at the right time, in the right place, in the right context and with the right support. It is precisely the collision of such utterly unpredictable and uncontrollable factors that makes for a moment that can be recognized as historic.

We are having such a moment. And the person at the center is Janet Mock.

Janet Mock is a transgender writer and advocate whose first book, the memoir Redefining Realness, details a truly American story. Its poor heroine winning independence, success, and love through intelligence, determination, and hard work makes it timeless, while its portrait of a society grappling with issues of fragmented families, race, drug addiction, abuse, sex work, poverty, sexual orientation, and gender identity make it more timely and relevant than anyone expecting a “transgender memoir” could possibly predict.

Mock recently taped an appearance on Piers Morgan Live, her first interview outside of the “bubble” of social justice circles and sympathetic peers. There’s little about the interview itself that would presage the coming fiasco. It is clumsy and awkward, but utterly predictable. The whole of the exchange can be summarized as “I can’t believe you used to be a boy,” an approach to which trans people are forced to become inured.

Some viewers would have gawked along with Piers Morgan, some would learn, hopefully a few would buy the book, and trans people would have seen it as little more than a teaching moment and another small step forward.

And here we have the first history-provoking accident. The producers chose not to air the segment for nearly a week, and it happened to air the very night of Janet Mock’s book-launch party. Many of Mock’s most ardent supporters and closest friends were together celebrating, away from any televisions. None saw the segment, the way the producers had edited it, or the graphics they used.

However, all of us saw Twitter. We saw the official show feed ask the question “How would you feel if you found out the woman you are dating was formerly a man?” And we saw the reactions of our community, as outrage poured in on social media. Janet was not alone that night, and in this heightened context of solidarity and celebration, she, along with actress Laverne Cox, snapped a photo summing up the collective reaction to the way producers has framed the interview.

Then, for some inexplicable reason, Piers Morgan himself jumped into the fray, eventually dismissing trans people as “enraged” and “stupid” and saying he would “deal with” Janet Mock the next night.

I’ll deal with you tomorrow night on air @janetmock – never been treated in such a disgraceful manner. Be proud.

How do we explain why someone with a primetime show on a major network, someone with 3 million followers, would feel bullied by a young author promoting a first book, and her 17,000 followers?

What happened that night happened because of a larger unspoken context, because of what had been happening for years in countless other ways at a smaller scale, to Piers himself and undoubtedly to countless of his peers and colleagues.

Cisgender people have been confused and threatened by trans people, by anyone not conforming to inherited and unquestioned gender norms. Straight people have been uncomfortable with different sexual orientations, or even the implication of such possibilities. White people have been anxious around black people, any people of color, and afraid of discussions about racism, its history, and their ongoing complicity in it. Men have been scared of women, their power, and their refusal to remain the second sex.

In short, those with power have known that they’re losing their exclusive hold on it.

The reactions to the realization of such loss range widely, from fear to compassion to humor. We can see three embodiments of points along the spectrum in Bill O’Reilly, Piers Morgan, and Stephen Colbert: the conservative, the liberal, and the parody.

Next to Bill O’Reilly’s reactionary politics, Piers Morgan is a “good guy,” a classical liberal and self-appointed ally. We can forget he’s another rich, straight, white guy with a huge platform. Likewise, Stephen Colbert can make fun of both Bill O’Reilly and Piers Morgan, the entire edifice of egomaniacal white male privilege, while still benefiting from it himself.

As the mediocre middle, Piers Morgan can lean in either direction. He could have reacted to the backlash against the initial interview with humor and openness, more Colbert-like. Instead, he went full O’Reilly, indignantly framing himself as a victim and revealing an astonishing blindness toward the real power dynamics at play. At least with O’Reilly, there’s a smug self-awareness of the theatrics at play. Morgan seemed to honestly believe he was the victim.

This happened—was able to happen—only because of the wider cultural anxiety around difference and the ever-loosening grasp of power by those constituting the invisible “normal” by which all else is defined.

In this system, women are less than men, black is less than white, and trans is less than cis. In this world of less, Janet Mock’s more is simultaneously a novel wonder and discomfiting threat. It must be controlled. Dignity is not innate for the less, but rather bestowed. Piers Morgan, as an embodiment of the liberal, compassionate aspect of power, did the “right” thing by giving Mock space, by allowing for difference. When such an allowance was not simply accepted with unqualified gratitude, it evoked every anxiety around the place of that difference.

When he had Janet Mock back on the next night, it was for one purpose: to address a threat to power. Morgan’s second interview, little more than a public tantrum, did not go as planned however. And here we see the moment the tide turned:

In this moment, Janet Mock and Piers Morgan are historical actors playing out a dynamic centuries in the making. The most perfect possible embodiment of privilege in Western culture is desperately trying to reinforce the existing power structure by controlling the place of the most perfect possible embodiment of those denied privilege in Western culture.

A straight white man is trying to give advice to a black trans woman. And she doesn’t need it.

If the tide turning was that rejection, the further evidence of receding waters was Mock’s appearance on Stephen Colbert.

He is no less comfortable with trans women than Piers Morgan, as has been revealed repeatedly in past jokes that clearly fall on the side of mockery rather than parody, but he’s self-aware enough to know his place in relation to such discomfort.

By siding with Janet Mock, with trans people in general, he acknowledged that his ignorance and confusion were his problem, and that one solution was openness. His response to the anxiety was humor. As another straight white man, he can only maintain his place in the system by knowingly making fun of it, which is the beginning of a shift. Humor is the truest signal of change because it acknowledges and accepts the inevitability of such change rather than fight it.

Tides do ebb and flow. We are still in the moment, and there will be more surges in all directions. It took centuries of resistance by countless people and movements to create this particular moment, and the wider one for trans people includes Stonewall, Sylvia Rivera jumping on stage at the Christopher Street Liberation Day Rally, Laverne Cox and Carmen Carrera’s appearance on Katie Couric’s show, and events yet to come.

There is still an incredible amount of work to be done, and none of this yet translates into a guarantee of safety for anyone embodying difference, much less other trans women of color. Nonetheless, an acknowledgment of the moment lends further support, and helps allow us to contextualize our actions.

The final proof of this shift in power came soon after the show aired. And though it can’t be attributed directly to the interview, the timing is far too auspicious not to get wrapped into the historical nature of the moment: Piers Morgan’s show was canceled.

Jen Richards is the codirector of The Trans 100 and creator of We Happy Trans, a website dedicated to celebrating positive transgender experiences that has received national media attention, as well as the websites WTF Trans Dating,Trans Love Stories, the Chicago Trans News, and the Activism Facebook group. She’s the cohost of Sugar & Spice, an advice and news podcast, and organizer of No Boys Allowed, a group for trans feminine individuals in the Chicago area.