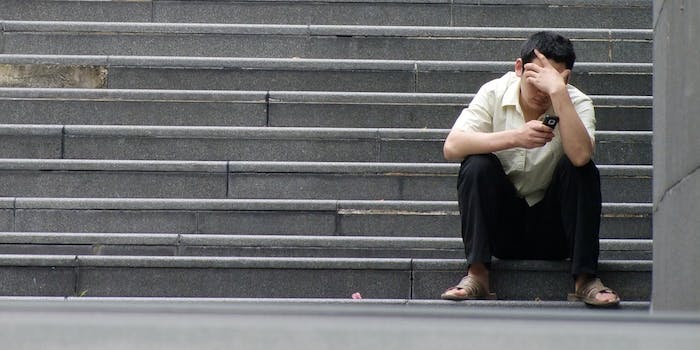 Gay men love their hook-up apps. But what are the side effects of looking for connection on your phone?

I like dating apps for gay men. I’ve always been a fan. I like them for the same reason I like bridges: they connect; they amplify possibilities. You may never need the bridge, but you know it’s there to make your world larger. However, I lately realized that many friends and clients quietly abandoned these apps. While the voluntary withdrawal is justified by slightly different reasons, there seems to be a common complaint: a high level of stress associated with app usage.

Rob from Harlem, who was an on-and-off user until he decided to completely delete his app of choice, said:

“I got off because it wasn’t bringing anything positive to my life. I was trying to get validation from very superficial connections to strangers. I’m not sure what was missing, but I think that the ever-changing and rotating series of guys made it difficult to remember that everyone behind those profiles is an actual person.”

Rob told me he was worried about each exchange’s outcome. He had troubles dismissing rude users and about being summarily rejected. The mix of failed expectations, volatile attractions, and poor exchanges was nerve-wracking.

Steve from Fort Lauderdale, a six-foot-one, handsome and successful man who regularly uses mobile apps to meet his dates, narrates a similar pattern of negative emotions linked to feeling inadequate and objectified. His body, mirroring his mind, often reacted in much the same way it would when under physical attack: shortness of breath, palpitations, and muscle tension—an anxiety response.

Geo-social apps make it easier for men to find each other when adventuring in new territories or for folks to connect in areas where it’s not safe—or even possible—to be out and proud.

Yet, these perks do not undermine the experiences of the smaller sample of unsatisfied users. Complaints seem to depend on quests and tolerance to people’s idiosyncrasies. Disappointed users feel unseen. Their identities go unrecognized, threatening individuality and leading to daily, mild-to-wild maltreatment. From the shores of New Jersey, Frank describes interactions of ephemeral assumptions, annoying conversations made of truncated words (“Sup? Lookin? Into?”), fleeting connections, and easy terminations. When asked what dating apps for gay men are missing he replied: humanity.

“I think people realize that these apps make it too easy to dehumanize others. Everyone becomes distilled down to a hot body or a witty remark and the totality of the person is lost.”

Dehumanization, the act of depriving an individual of human qualities, is reportedly accompanied by negative cognitive and emotional responses, which include absence of meaningful thought, inflexibility, anger, and guilt. Dehumanization can originate by subtle forms of daily maltreatment: ignoring, blocking, insulting, joking, etc.

In addition, there is no etiquette on these apps: no culturally defined good manners, no suggested behaviors, no informal punishments following transgression of unwritten rules. You are on your own. It’s no man’s land. It’s a potential enemy in your pocket.

“I just find the interfaces annoying and their ever-presentness on my phone distressing. I feel like if I didn’t have notifications turned on, every time I logged on my messages would be full of people freaking out about the fact that I wasn’t responding in a timely fashion. The people on the services are really weird”.

That was D. from Brooklyn. He no longer uses apps and misses the days of Internet-based hook-up websites.

“I get stressed out because I feel like, no matter what I do, people get upset. I get rejected several times every day and that’s OK. When somebody I am not into hits on me though, I never know what to do. If I don’t reply, I am rude. If I tell them it’s not a match, I’m jumping to conclusions. If I reply enthusiastically, I’m leading people on. If I choose my words, I’m standoffish. It’s a no-win situation.”

So, how do we deal with these daily misdeeds and lawless battlefields? How do we avoid a Hook-Up App Stress Disorder?

The key is to consider dating apps solely as an entry point, a probable—yet uncertain—gateway leading to meaningful interactions of all sorts. Intimacy protects from dehumanization and it’s the pathway to inner connections. It’s a process, not an event. Intimacy can be hardly developed through a touchscreen device or during a single sexual encounter. It’s important to avoid demanding from these apps what their interfaces don’t allow. By definition, intimacy takes time, patience, openness—all non-defining elements of mobile-to-mobile exchanges.

Try to be kind.

Because I am a fan of opportunities, I am still a fan of dating apps. The sexiest of playmates, the best of friends and/or the dreamiest of husbands could be only a thumbnail picture away. And when things get too heavy, there’s always a real world out there.

Renato Barucco is a licensed psychologist in Italy. He is currently the head of the Transgender Family Program at Community Healthcare Network in New York City. This article was originally featured on Huffington Post Gay Voices and has been republished with permission.