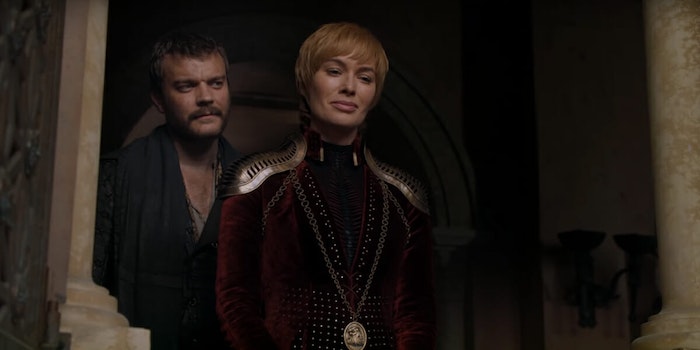 How to watch Game of Thrones season 8, episode 4 for free

'Now we will win the last war.'

Time is flying faster than Gendry can run. Game of Thrones season 8, episode 4 airs this week, meaning we are officially past the halfway mark. There are only three episodes left in the series—and one major conflict remains.

Aside from a reckoning for (or from?) Cersei, what could possibly happen? One thing we’re particularly looking forward to is Bronn’s reaction when he finally arrives in Winterfell, only to find out the war between the living and the dead was hashed out in one night. Perhaps he can take House Umber’s castle for his troubles—it’s currently unoccupied and recently decorated!

Episode 4 was directed by David Nutter, who did the first two episodes of season 8. Nutter directed a few other iconic episodes in the series, including the infamous Red Wedding (“The Rains of Castamere”) and the shame-riddled “Mother’s Mercy.” It will be a break from last week’s director Miguel Sapochnik, but he’ll be back for episode 5, so don’t adjust your screen’s brightness just yet.

Here’s everything you need to watch Game of Thrones season 8, episode 4 for free.

Game of Thrones season 8, episode 4 is available exclusively on HBO.

When does Game of Thrones season 8, episode 4 air?

Subsequent episodes will be on Sundays at the same time. There are six episodes scheduled for the final season, ranging in length from 54 minutes to a whopping 82 minutes. This week’s episode will be 78 minutes long.

How to watch Game of Thrones season 8, episode 4 for free

After the first two episodes of Game of Thrones put the spotlight on its characters, the highly anticipated battle episode, “The Long Night,” ramped up the action. Full of shocking moments, smaller poignant asides, and more than enough death to go around, it was a lot, and it ended with the shocker of a lifetime: Arya Stark killed the Night King with a Valyrian steel dagger. So why did parts of it feel like such a letdown? Much of the episode was so dark that you could barely see what was going on, and you couldn’t tell if Ghost and Rhaegal survived until next week’s preview came around. And with all the carnage came another complaint: Game of Thrones keeps protecting its lead characters with Valyrian steel plot armor while throwing its more minor characters to the wolves. Now, with the bodies on the ground, the living have to pick up the pieces along the way. With the Army of the Dead gone for good, that will certainly be a lot less daunting. —Michelle Jaworski