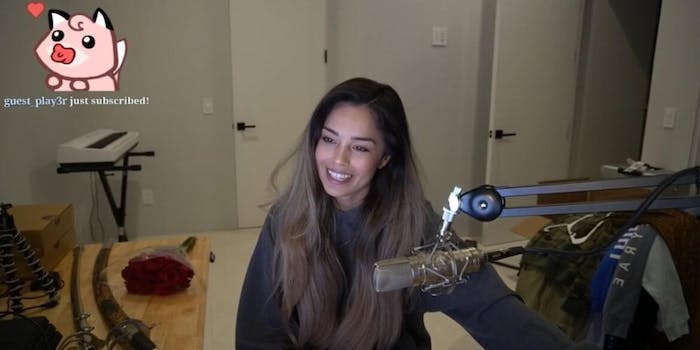 It's yet another defeat for Twitch.

Twitch is losing yet another mega-popular gaming streamer. On Monday, Valkyrae, who has about 945,000 Twitch followers, announced she was leaving the streaming service so she can broadcast herself exclusively on YouTube.

It’s another defeat for Twitch, which previously lost gamer CouRage to YouTube Gaming and Ninja, Shroud, and Gothalion to Mixer.

In a slick video produced by esports organization 100 Thieves, Valkyrae, whose real name is Rachell Hofstetter, described what gaming means to her and that she’s ready to move on to “the next chapter” of her career.

I'm so happy to announce that I have signed with YouTube!https://t.co/rwCNthmYV2 pic.twitter.com/DFAZS1hfX7

“Throughout my entire life, there’s always been one thing that’s remained consistent,” Hofstetter said in the video. “After the longest of days, it’s what inspired me to keep going. Through my most difficult moments, this community has always been there for me … I’m so excited to keep moving forward. It’s time for the next chapter. Are you ready for something new?”

At the end of the video, Hofstetter reveals that her first YouTube stream is coming on Tuesday.

CNBC notes that YouTube also announced Monday that it had inked deals with Lannan “LazarBeam” Eacott and Elliott “Muselk” Watkins. They have 168,000 and 421,000 Twitch followers, respectively.

Esports consultant Rod “Slasher” Breslau reported that though Hofstetter’s new multi-year deal with YouTube Gaming is significant, she’s not making $1 million per year like other major streamers with new contracts.

while the terms for Valkyrae's move to YouTube from for Twitch are significant, it is less than the $1 Million+ per year that other major streamers have received in their own deals, sources said

According to CNBC, Twitch’s impact has suffered in the wake of so many popular gaming streamers leaving. In 2018, Twitch hosted 67.1% of all the live stream hours watched worldwide. In 2019, that number fell to 61%. YouTube’s portion of live stream hours, meanwhile, increased slightly from 27.5% in 2018 to 27.9% last year.

Update 12:27pm CT: In a statement released Monday, Ryan Wyatt, the head of YouTube gaming, said, “Gaming on YouTube just had its best year yet. We saw over 35 million people upload a gaming video in 2019, we had live stream events like Fortnite ‘The End,’ where over 4 million people tuned in and we added incredible creators like Lachlan and CouRage to our ever expanding roster of exclusive live streamers. Every gaming creator, no matter where they live stream, is a YouTube gaming creator, and we’re proud to be the home of the best gaming content in the world. 2020 is poised to be even better than 2019 with the exciting content we know will be coming from LazarBeam, Muselk and Valkyrae. We’re so excited to have them be a part of our global live streaming family.”