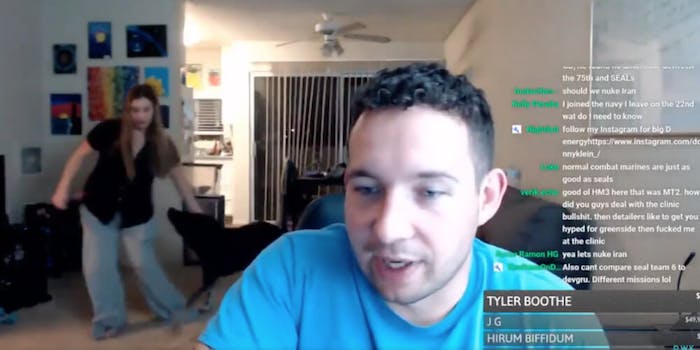 'I believe you should have intervened more physically.'

YouTuber Donny Klien has come under fire after a woman appeared to abuse a dog in a recent Twitch stream of his.

Klien, who is also known as DwkVideos, was streaming on Friday when a woman in the background gets up to throw a pillow at the dog. She then grabs the dog by the collar and pulls him away from the kitchen before the dog wrestles out of her grasp and barks at her.

“Why are you being mean to Bubba? What are you doing to Bubba? What? Relax,” Klien says before addressing his stream by adding, “She’s overreacting.”

“I’m fucking done. I’m done,” the woman says in response, explaining that she was trying to keep the dog out of the kitchen.

Fans are now questioning the situation, with some demanding action from Twitch and People for the Ethical Treatment of Animals (PETA).

“THIS PIECE OF SHIT HUMAN BEING IS LITERALLY ABUSING HER DOG LIVE ON STREAM,” Twitter user @whiqk wrote, tagging both Twitch and PETA.

THIS PIECE OF SHIT HUMAN BEING IS LITERALLY ABUSING HER DOG LIVE ON STREAM @TWITCH @peta https://t.co/fpPujAgo84

One common thing I always see in these YouTube/twitch dog abuse vids is that the dog is always just wanting to play. It’s not being harmful or aggressive, just playful and for some reason people get upset by that?? I’m convinced these people are just the devil. https://t.co/OCUCb23QdW

Another user wrote that while Klien seems to be “disapproving of your girlfriend’s actions” during the stream, he “should have intervened more physically.”

i'm not sure if this happens frequently or not, but let it be known that karma is a bitch – almost as much of one as your girlfriend – and your dog is an animal who doesn't look too hesitant on retaliating.

maybe next time will be the last.

Others seemed to agree that it wasn’t his fault, but he should have done more to remedy the situation.

“I mean the guy didn t do anything he could stop her but he didn t hurt the dog or did anything at all idk what to think his wife abused the dog,” Twitter user @q_baza wrote.

But he coulda helped

Klien appears to have made his Twitter private in response to the hate he has received online.

Animal abuse being caught on camera has, unfortunately, become quite common.

In July, Popular Twitch streamer Alinity Divine was seen throwing her cat during a live stream. And in August, YouTuber Brooke Houts accidentally posted footage showing her seemingly punching and spitting on her dog. Both influencers were caught in a scandal following the footage going viral on social media.

Although Divine was not banned from the platform, Twitch has taken action against animal abuse in the past by banning Twitch streamer SleepyMia in December over accusations of dog abuse.

Twitch has yet to take any action against Klien’s channel at this time.