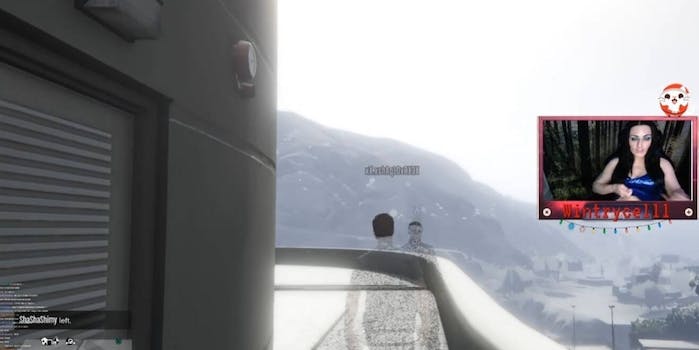 Twitch streamer Wintrycelll was playing Grand Theft Auto with a few other gamers on Monday when she began bragging that she could get nude on camera and wouldn’t get punished for it. Turns out, she was quite wrong.

Wintrycelll was gaming when she got into a discussion with fellow streamers about how her friendly relationship with Jeff Bezos—the founder and CEO of Amazon, which owns Twitch—allowed to her to break the rules about broadcasting yourself naked without facing any repercussions for it.

Another chimed in, “Can you get naked on Twitch, please?”

“Do it,” one of the gamers said. Even though another of the streamers said, “You can’t do that. Don’t do that,” she did so anyway, lifting her shirt and her bra.

As of Tuesday morning, a note on her channel—which has about 9,000 followers—reads only, “Sorry. Unless you’ve got a time machine, that content is unavailable.” That’s the telltale sign that Twitch is punishing her for breaking the site’s terms of service.

Wintrycelll hasn’t commented on her punishment on her Twitter account. But unfortunately for the streamer, her so-called relationship with Bezos apparently isn’t as strong as she originally believed.