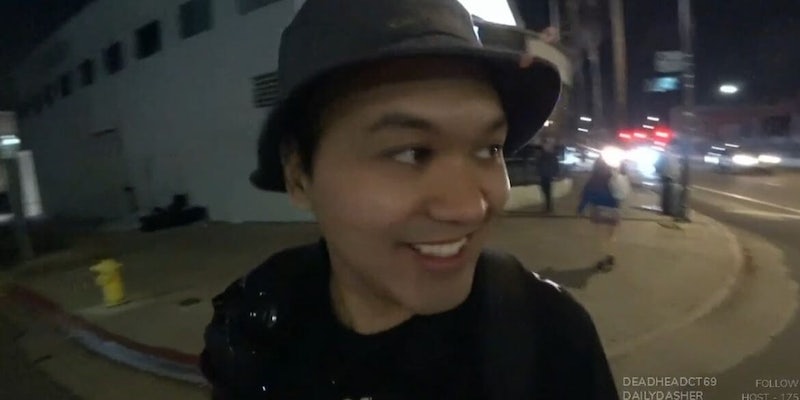 'Damn, that is weird. I didn’t expect that.'

A Twitch streamer was confronted by someone claiming to be a member of the notorious gang MS-13 during a live stream on Thursday.

IRL streamer jonsf was walking down a street broadcasting himself to his approximate 700 followers when he was approached by a woman and asked if he was holding a camera and why. “I’m live-streaming,” jonsf said.

“What does that mean?” she asked.

“I’m streaming to the internet,” he said.

Then, she asked if he knew about Korea Town and who lived in that area of town. That seemed to confuse him so she yelled it in his face for him.

“This is my territory,” she said as she walked away from their encounter. Then, she called him a “Korean ass,” and he responded by saying, “Oh shit. I’m not Korean.”

He continued to walk away from the encounter and said, “Damn, she called me Korean. She threw out some fucking trivia at me. I was like, ‘Oh shit. I don’t know, dude. What is this? Fucking jeopardy?’ Damn, that is weird. I didn’t expect that.”

Of course, there’s no way to know if the woman is involved in MS-13—the international gang that is loathed and feared by many in the U.S.—or if she was simply trolling him. Either way, people seemed to love it. As of this writing, both clips combined have about 190,000 views.

While many on Reddit didn’t buy her claim that she was a member of MS-13, one redditor did give her the ultimate Twitch compliment. At least, they wrote, she was entertaining.

“It was funny to see her act so hard though when she looks like 5’1,” they wrote. “Better content than most randos, definitely better than the streamer.”