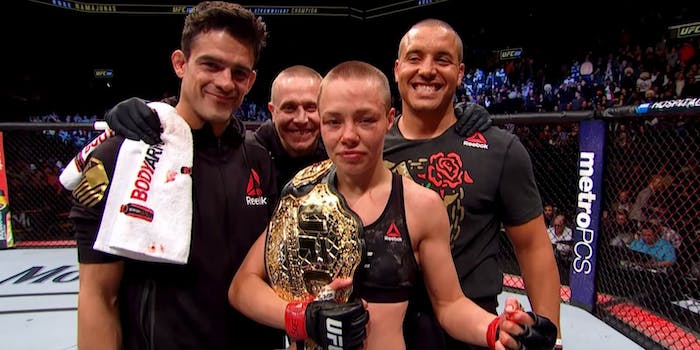 It’s finally time for UFC 237. Strawweight champion Rose Namajunas is entering enemy territory to take on challenger Jessica Andrade in what’s sure to be a thrilling main event. Elsewhere on the card, Anderson Silva is looking to potentially retire on top and in front of a hometown crowd as he takes on Jared Cannonier, and José Aldo and Alexander Volkanovski clash in a high-stakes match that could determine who gets a shot at the featherweight belt.

Unless you’ve already packed your bags for Brazil, there’s only one way to catch all the action. Here’s everything you need to know to live stream UFC 237.

UFC 237: How to watch Rose Namajunas vs. Jessica Andrade

Gone are the days when you could order UFC pay-per-views from Amazon Prime or Sling TV. Thanks to a new seven-year deal, ESPN+ is the exclusive host of UFC PPVs online. You have two options for ordering UFC 237 with ESPN+, and one of them comes with a full year of ESPN+ programming for free.

If you’re not a current ESPN+ subscriber, you’ll need to purchase UFC 237 from your desktop or smartphone here. If you’re already a subscriber, you can easily buy the PPV from the ESPN app by simply clicking on the event in the ESPN+ tab.

Worth noting: Only the UFC 237 Main Event will be featured on ESPN+:

ESPN+ is the exclusive host of UFC PPVs and offers 20 UFC Fight Night events per year. But there’s a lot more to love about the subscription service than just MMA bouts.

Think of ESPN+ as an expansion pack for ESPN. You’ll use the same ESPN app you’re used to—available on Amazon Fire Stick, Roku, and iOS and Android devices (full list above)—but your ESPN+ subscription unlocks a ton of bonus features and premium content, everything from original series like Kobe Bryant’s Detail and OJ: Made in America to thousands of live college sporting events. Basically, you’ll be able to watch anything that’s currently locked behind the golden “E+” banner on the ESPN app or website. That includes the entire 30 for 30 catalog—which is reason enough to sign up—as well as daily MLB action, roughly 250 MLS games, and a lot of international soccer action.

UFC fans can look forward to original series like UFC Destined, Ariel & the Bad Guy, and Dana White’s Contender Series. For what it’s worth, you’ll also get to read exclusive articles and experience fewer ads across the ESPN network.

The UFC 237 preliminary bouts will air on ESPN, starting at 8pm ET. Irene Aldana, a former bantamweight challenger, was originally supposed to take on Bethe Correia at UFC 227 in August 2018, but it was delayed due to injury. Here’s the follow preliminary card:

As a reminder: Your ESPN+ subscription will not allow you to watch ESPN for free. You’ll still need a cable or live TV subscription to watch ESPN and the UFC 237 prelims. We have complete guides to watching ESPN online here, but here’s all of the essential info you’ll need. The good news: Once you download the ESPN app on your streaming device of choice—and enter in all of your credentials—you’ll be able to stream the prelims and the main event without missing a beat.

UFC’s Fight Pass remains the exclusive host of the early prelims for UFC pay-per-view events. The service will host four exclusive fights, starting at 6:15pm ET. Note, Priscila Cachoeira has signed on to replace Yanan Wu, due to an undisclosed injury, in a flyweight bout against Luana Carolina. Here’s the full line-up:

Launched in 2014, UFC Fight Pass takes you even closer to the action. It offers a behind-the-scenes look at every UFC PPV and hosts the undercard bouts (but not the PPV portion, just so we’re clear). UFC Fight Pass is also where you’ll find all of the smaller UFC events that don’t air on ESPN. UFC Fight Pass works with most of the same devices as ESPN+: Apple TV, Xbox One, Xbox 360, Amazon Fire TV, Chromecast, Roku, Samsung Smart TVs, LG Smart TVs, and iOS and Android devices.