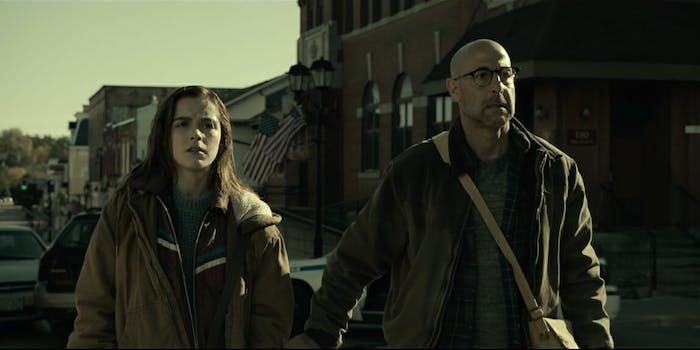 Everyone hates the ending to Netflix horror flick ‘The Silence’

That's how they decided to end it?

A bad ending can ruin an entire movie. Such appears to be the case with Netflix’s recent release The Silence.

The film, starring Stanley Tucci and The Chilling Adventures of Sabrina‘s Kiernan Shipka, has been generating a lot of buzz online. Unfortunately, the vast majority of conversations revolve around how much people loathed the conclusion of the monster flick.

Despite its solid cast and interesting idea—even though A Quiet Place did it better last year—the ending of this Netflix horror movie left a lot to be desired, viewers are saying.

The film follows a family of five as they attempt to escape the violence unleashed by bat-like creatures called vesps. These winged monsters are blind but have exceedingly good hearing. As you may have guessed, silence is key in this particular version of the apocalypse—A Quiet Place-style. Shipka’s character—16-year-old Ally—was deafened in a car accident a few years prior. With all of the family able to communicate via American sign language, they are better able to avoid the creatures.

The Daily Dot’s Eddie Strait put it like this: “For its first hour, The Silence feels like the prologue skipped over in A Quiet Place. Then a cult shows up. It’s a development so ludicrous and full of buffoonery that I was mad the cult members didn’t show up earlier… It’s always an odd feeling to watch a post-apocalyptic movie and not care if the people survive, yet here we are. I can’t wait to forget about the movie.”

Here’s where we get into that controversial ending. Spoilers below.

The family rejects the cult leader’s advances to join his cult, and so the guy throws a bunch of ringing phones into their home to attract vesps. Then it shoehorns a showdown and abruptly cuts to survivors in the woods. This all happens in the closing 30 minutes of the movie, and viewers can’t believe how rushed it felt. And, come on, how do they still have Wi-Fi in the woods at the end?

The ending of the film so swiftly jumped the shark that many viewers were taken aback. “The Silence on Netflix is pretty good but that ending…thats the worst shit ever,” one viewer wrote.

If y’all wanna movie to watch on Netflix, “The silence” is good…ending trash though.

The Silence on Netflix has to be the biggest disaster in Hollywood this year. Who gave this movie the fuckin’ go ahead?
3/10

Whatever you do, don't watch The Silence on Netflix. It is like A Quiet Place and Bird Box if they were boring and uninspired pieces of garbage. 1/10.

Just watched "The silence" on Netflix. Basically it's just a shit version of bird box except you can actually see the creatures.

Just finished watching the ending of The Silence on Netflix.. The ending pissed me off. Like bruh, that's it? That's how the movie ends after all that.

People on Reddit have been tearing the ending to shreds since the film landed on the streaming platform last month.

If, after all this, you still want to watch The Silence, more power to you. Just remember that the internet warned you when you feel robbed by the ending.