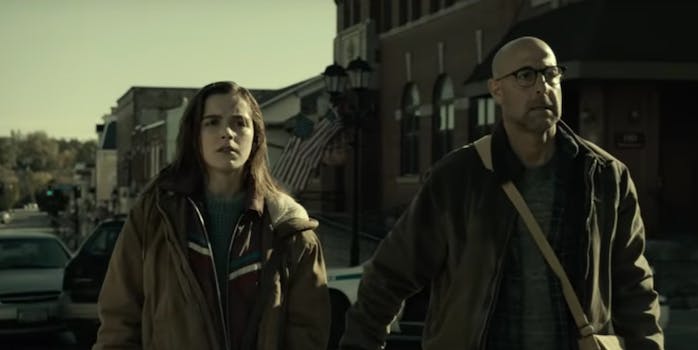 Netflix’s ‘The Silence’ is an apocalyptic snoozefest

Not even Stanely Tucci and Kiernan Shipka can save this turkey.

If video stores were still a thing, The Silence would sit on shelves hoping to trick people into a rental. In the halcyon days of yesteryear, low-budget cult fave the Asylum would have produced The Silence. Instead, it’s masquerading as a Netflix release. It is the Transmorphers to A Quiet Place’s Transformers.

Both movies share a premise and it’s impossible to not think of A Quiet Place while watching The Silence. I think A Quiet Place is mediocre at best, but it comes out looking like a masterpiece in this comparison. The Silence is a thoroughly bad movie that will make you wish you were watching something else. It’s a horror movie that generates minimal tension and provokes no emotional reaction. It flails about with occasional bursts of loud noises and violence, just like the mutant bat creatures in the movie.

An unfortunate number of people will probably be sucked into The Silence by Netflix’s algorithms. The movie stars Stanley Tucci and Kiernan Shipka. They’re good enough to lend The Silence more credibility than it deserves.

After an outbreak of mysterious bat-like creatures threatens humanity, the key to survival is adaptability.

The movie opens with a dark and visually murky cave exploration that accidentally unleashes a swarm of huge bats. We go from 1,000 feet below the Appalachian Trail to northern New York, where our protagonists, the Andrews family, live. We have Ally (Shipka), 16 years old and three years removed from a car accident that left her deaf. She lives with her mom, dad, and brother. The mom and brother are mostly irrelevant, as the story is really about Ally and her dad, Hugh (Tucci). The family members are forced to leave their home when the bat creatures, called “vesps,” begin attacking major metropolitan areas. As bats do, even ones as jacked-up as these, they hunt by sound. Allegedly, vesps have extra sensitive hearing, but that proves to be malleable to meet the plot’s needs.

I cannot stress enough how dopey The Silence is. There’s a scene, once everyone knows they need to be quiet, where Ally talks to her boyfriend via an iPad with the sound on. There are multiple scenes that feature sacrifices of some kind that play out in slow motion, for dramatic effect. Readers, I howled at one of those scenes.

There is nothing substantive in the story, and whenever the film swings for raw emotion, it whiffs. The Andrews family runs from place to place, losing a few people along the way, but the core members keep surviving in spite of their own actions. In a scene at an abandoned store, Ally draws the vesps’ attention, but they inexplicably do nothing.

Tucci and Shipka can’t help but to pop on-screen. However, they aren’t good enough to mask any of the screenplay’s deficiencies, only highlight them. Other actors don’t fare as well, like John Corbett, who plays family friend Glenn. There’s a term in sports for when a player avoids a potentially violent situation, which results in the opponent scoring. You may see a receiver ease up on a play over the middle to avoid being crushed by a linebacker. It’s called a “business decision,” and Corbett makes one here. Glenn’s brief run in the film ends when he gives himself up for the good of his friends. Corbett’s performance is blasé to the point that it looks like the actor is cutting bait on the movie. It’s another funny moment in a film that never aims for a laugh.

For its first hour, The Silence feels like the prologue skipped over in A Quiet Place. Then a cult shows up. It’s a development so ludicrous and full of buffoonery that I was mad the cult members didn’t show up earlier. I won’t say more because anyone who reads this review and still wants to watch the movie should get to enjoy its poppycock third act as much as I did.

Directed by John R. Leonetti from a script credited to Carey and Shane Van Dyke, based on Tim Lebbon’s novel, The Silence is a miserable way to spend 90 minutes. The film hones in on the idea of adaptability as a key theme. It’s thin on its own and becomes thinner as the movie struggles to explore it in a meaningful way. The Silence grasps for the notion of parental fear that provides the dramatic backbone of A Quiet Place. It comes up empty-handed because the film is dramatically and emotionally inert. It’s always an odd feeling to watch a post-apocalyptic movie and not care if the people survive, yet here we are. I can’t wait to forget about the movie.

If you want to watch something with Shipka, Netflix has Sabrina and Mad Men. If you want more Tucci, and who doesn’t, he’s in a ton of other movies. But if you want an elite recommendation, switch over to Amazon Prime and watch the Shipka-starring The Blackcoat’s Daughter. Or A Quiet Place, which just landed on Prime and Hulu.

Just stay away from The Silence, OK?