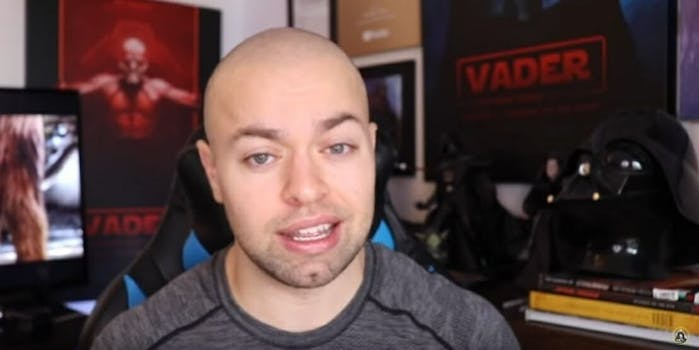 YouTuber Star Wars Theory, embroiled in a copyright claim with Disney that’s devastated him, is getting his happy ending after all.

A few days ago, the YouTube star revealed that a music company called Warner Chappell, acting on behalf of Disney, made a claim on his recently uploaded Darth Vader fan film. That meant the previous agreement he had with Lucasfilm that nobody could make money on the video was suddenly moot. The claimant, Warner Chappell, would take the ad revenue from the video that’s currently received 7.2 million views.

Star Wars Theory told the Daily Dot that Warner Chappell had threatened his channel with a copyright strike and to outright delete the video if he appealed the copyright claim, and to save his channel and his video, he gave up the fight.

But on Wednesday, Star Wars Theory had glorious news. Warner Chappell dropped the claim, meaning that nobody will keep the money that could have been made from the fan film. (Star Wars Theory, who said he put in $150,000 of his own money to make the video, said that he would have earned at least $80,000 so far if he’d been allowed to monetize his work.)

@Lucasfilm_Ltd has served justice to the fandom. This is a good day. pic.twitter.com/z45Va42rjy

As Star Wars Theory told the Daily Dot in an email on Wednesday night, that means “Lucasfilm stepped in and told Warner Chappell they can’t take the money on this.”

In a video uploaded Wednesday, Star Wars Theory said the fans’ voices were heard and that Lucasfilm played the role of hero in this saga.

“The claim has been released. The film is no longer running ads,” said Star Wars Theory, who has added nearly 60,000 subscribers since the controversy began earlier this week and who now has more than 1.5 million overall. “It’s now back to the fans entirely. Nobody is making money off it. Not Lucasfilm who deserves it. Not me. Not [Warner Chappell], that’s for sure. Rest assured, Lucasfilm has come to our aid.”

The problem began after the fan film was uploaded in December. Using a YouTube copyright claim system that has been controversial—just ask YouTubers TheFatRat, AngryJoeShow, and Smelly Octopus about the potential for claim abuse—Warner Chappell claimed the video and the revenue that came with it because it said Disney held the copyright for the music composition. Even though Star Wars Theory hired his own composer to create original music for his film, Warner Chappell said Disney still owned it.

Neither Warner Chappell nor Disney responded to Daily Dot requests for comment earlier this week.

“This whole crap has been so annoying,” he said in his vlog on Wednesday. “I’ve finally gotten some sleep, and we can have some fun.”

That includes continuing his plans to make a second episode of his Vader fan film.