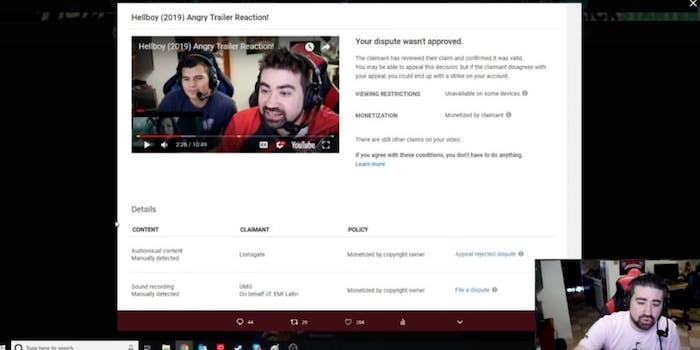 YouTuber says Lionsgate Films bullied him and took his revenue

‘Lionsgate are a bunch of f*cking a**holes.'

Another YouTuber is claiming that the platform’s copyright strike policy is out of control, and he’s accusing a Hollywood movie house of taking his revenue because he gave one of its film trailers a bad review.

YouTuber AngryJoeShow, who has more than 3 million subscribers to his channel where he mostly posts reviews of movie trailers, uploaded a video on Tuesday where he claimed Lionsgate Films made a copyright claim on a review of the upcoming Hellboy movie.

And Angry Joe, whose real name is Joe Vargas, is sick of it.

“Lionsgate are a bunch of fucking assholes,” Vargas said in his video. “If you don’t say anything positive about their film or if a lot of people are listening to your negative opinion on their film, what they’re going to do is claim ownership of your YouTube video.”

That means Lionsgate—which did not immediately respond to a Daily Dot request for comment on Wednesday morning—would then receive the revenue earned by that video. That’s when the battle over ownership of the video begins. It’s been a real issue for other YouTubers, including TheFatRat, who recently battled with a Colombian music company after it copyright-claimed a musical composition TheFatRat originally made 19 months earlier.

In the case of Vargas, he said his negative opinion of the Hellboy trailer was met with resistance from Lionsgate, which apparently put a copyright claim on the video he uploaded in December that accumulated more than 300,000 views.

Last week, Lionsgate did not approve the appeal.

So a @Lionsgate employee has reviewed our trailer reaction and refuses to remove their ownership of our video. They've reinstated the claim. In addition I think they told their buddies @UMG about it as well (trailer song), as suddenly they've jumped in & manually flagged it too. pic.twitter.com/V8tALsjxqo

Vargas said other videos he’s made of Lionsgate films also have been claimed by the film company.

“I think what triggers them is whether you’re being positive and how many views it has,” Vargas said. “If you have a ton of views, you’re targeted, because they want to make pennies …  I can’t help but feel like that this is a bully tactic, an abuse of the copyright system on YouTube.”

As stated by YouTube in its support center, “In most cases, getting a Content ID claim isn’t a bad thing for your YouTube channel. It just means, ‘Hey, we found some content in your video that’s owned by someone else.’ It’s up to the copyright owners to decide whether or not others can reuse their original material.”

YouTube, though, has also said it has teams that are constantly investigating abuse of the content claims system and that it has revoked access to hundreds of flaggers.

This continues to be a real issue for a channel’s future. If a YouTuber continues to appeal the copyright claim, their channel could be punished by YouTube with a strike. Vargas said he’s heard from other content creators that if you threaten to take the company making the content claim to court, the claim oftentimes will be dropped.

In the case of TheFatRat, YouTube itself removed the claim from the music company that flagged him. But he told the Daily Dot, “I think the big problem is that YouTube assumes that the claimant is right. And that’s what can make it frustrating.”

A Daily Dot message to YouTube was not immediately returned.