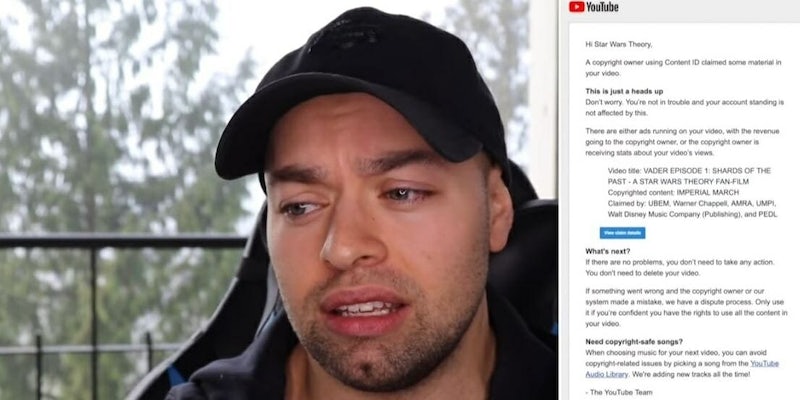 The YouTuber could have been earning tens of thousands of dollars.

A YouTuber recently uploaded a Darth Vader fan film with the understanding that nobody would make any money off the final product. Now, though, he said the film has been unfairly copyright claimed by Disney, and he’s shocked by what’s happened.

Before making the fan film, titled VADER EPISODE 1: SHARDS OF THE PAST, the YouTuber named Star Wars Theory said he came to an agreement with Lucasfilm that said he could upload his video but that he couldn’t monetize the ad revenue he’d potentially earn.

“I went to them and said I want to make a Vader fan film,” Star Wars Theory, who has more than 1.4 million subscribers, said in a new video he released Monday. “Can I crowdfund? Can I monetize it? Can I get some sort of payback from the money I’m going to be putting into this to make for the fans? They were like, ‘Nope, you can’t crowdfund. Nope, you can’t make money from it.’

“If you didn’t know, YouTube is my career. To not monetize something is like you going to work and not getting paid for your job. It was a bit of a decision.”

Ultimately, he decided to make the film for the love of the Star Wars franchise. Since he released the video on Dec. 21, it’s racked up nearly 6.5 million videos, and he estimated that he would have earned about $80,000 so far if he could have monetized it. That, he said, would have paid him his film production costs and given him a head start on a second episode.

“I don’t even know how to feel,” he said. “I’ve tried to be a really positive figure in the Star Wars community. There’s a lot of turmoil in there right now. I know there are a lot of channels that try to rip it to shreds. I don’t want to be one of those.”

Neither Warner Chappell nor Disney immediately responded to a Daily Dot request for comment. Star Wars Theory told the Daily Dot on Tuesday that he was told by Warner Chappell that if he disputes the claim, his channel will get a strike and the video will be deleted.

YouTube’s copyright claim system has been a hot-button topic for the community lately. YouTubers like TheFatRat, AngryJoeShow, and Smelly Octopus have recently made videos discussing how their work has been unfairly claimed by third parties, meaning the revenue they would have made on their videos now goes to somebody else.

As YouTube explains, a YouTuber can appeal the copyright claim, but the appeal doesn’t go to YouTube. Instead, it goes to the person or company who originally claimed the video. Eventually, if the YouTuber continues to unsuccessfully appeal the claim, their channel could face punishment from the platform.

“It’s not about the money,” Star Wars Theory said.  “It’s the principle. When they come to me with these rules … but then someone goes in there and manually claims it … to me, that’s very vindictive and very rude. Disney makes billions of dollars. This is pennies to them. It seems that they really don’t respect anything at all for the fandom.”

Update 1:18pm CT, Jan. 18: In a video posted two days after his story went viral, Star Wars Theory revealed that the copyright claim by Warner Chappell had been released and his fan film, once again, wasn’t making anybody any money.

Which is just the way he wants it.

“Lucasfilm stepped in and told Warner Chappell they can’t take the money on this,” Star Wars Theory told the Daily Dot in an email.