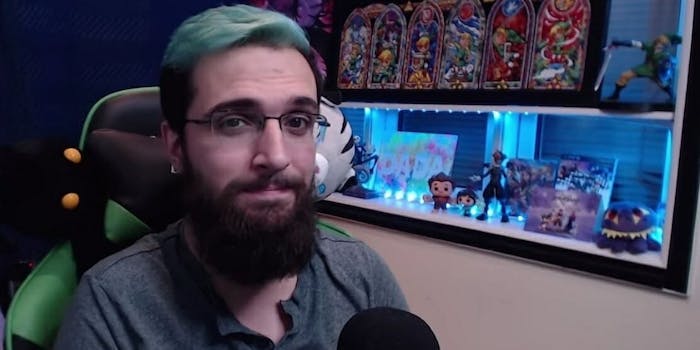 How broken is YouTube’s copyright system? This dude’s voice just got claimed

In recent weeks, a number of YouTube stars have claimed that the platform’s copyright claim system is broken, allowing other people and companies to unfairly take their video revenue. YouTuber SmellyOctopus might have discovered the most insulting breach yet.

The gaming vlogger who has 20,000 subscribers revealed on Twitter and in a video uploaded on Wednesday that his voice on a private stream was copyright claimed, essentially meaning that somebody said the sound emerging from his vocal cords was not his to use.

In a tweet, SmellyOctopus said he was testing his mic filters on a nine-minute private stream that automatically uploaded to YouTube. A company called CD Baby then claimed it as its own original work.

So apparently your voice can be copyright claimed on YouTube. I was testing my mic filters on a private stream and after I was done it got claimed by CD Baby.
Really @YouTube @TeamYouTube pic.twitter.com/k7EwoPGwSn

“My mic is being tested on stream, and they are claiming half a minute of my voice,” he said. “Apparently, CD Baby owns the right to my voice. I should probably get that fixed, or YouTube needs to fix their shit.”

After SmellyOctopus said he would simply begin using Twitch, where he has close to 1,500 followers, for his livestreams, YouTube admitted it was at fault for the copyright claim.

“It looks like the match system really blew it on this one,” YouTube tweeted. “We’re going to figure out what went wrong and fix it. CD Baby dropped the claim as soon as they saw the dispute, so at least that part of the process worked.

“To clarify, this isn’t something that CD Baby initiated—this was a mistake with the Content ID matching tool. As soon as they were made aware of the claim, they released it.”

Thanks for flagging this. It looks like the match system really blew it on this one. We're going to figure out what went wrong and fix it. CD Baby dropped the claim as soon as they saw the dispute, so at least that part of the process worked.

To clarify, this isn't something that CD Baby initiated — this was a mistake with the Content ID matching tool. As soon as they were made aware of the claim, they released it.

Yet, this has become a big issue for YouTubers who believe the copyright claim system is being abused. The system is set up like this: If a company or person believes a YouTuber is illegally using their copyright, they can make an ID claim against the YouTuber. If the YouTuber believes the claimant is wrong, they can appeal. But the appeal doesn’t go to YouTube. It goes to the person or company who originally made the claim. If a YouTuber appeals enough, they’re in danger of having a strike levied against their account, which could eventually lead to other kinds of punishment for their channel.

YouTube has said it doesn’t want to mediate between a company and a YouTuber to determine who holds the copyright, but it also recently told the Daily Dot that it has expunged hundreds of accounts that have abused the system and put false claims on YouTubers’ original work.

Recently, TheFatRat, who has 3.3 million subscribers, said a Colombian music company falsely claimed a song that was originally made by him after somebody else’s remix version of it was uploaded to YouTube. TheFatRat said his original video made him $3,000 a month—earnings that were in jeopardy when the music company claimed it (YouTube eventually dismissed the copyright claim).

Earlier this week, another YouTuber AngryJoeShow (more than 3 million subscribers) said movie house Lionsgate Films was bullying him by copyright claiming a negative review he had uploaded of the Hellboy movie trailer.

In the case of SmellyOctopus, he’s fed up and fearful because he doesn’t have the tools to fight back against a false claim.

“As a small content creator—or just a content creator in general—I don’t feel safe,” he said in a video uploaded Wednesday. “There’s a lot of fear when it comes to YouTube. … This is the stress we go through.”