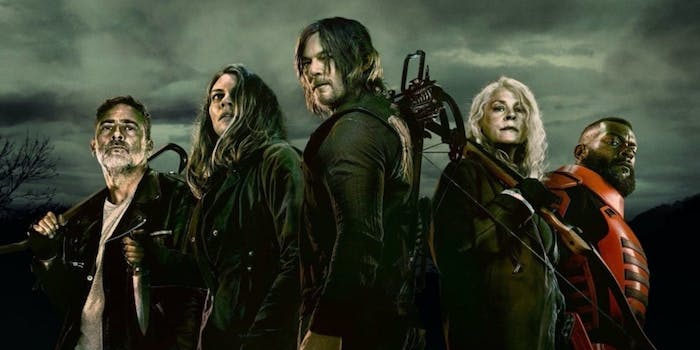 How to watch ‘The Walking Dead’

The beginning of the end.

For more than a decade, fans of prestige TV and zombies alike tune in every week to The Walking Dead. Three spinoffs and 11 years later, the show is finally coming to an end. You don’t want to miss the final season of The Walking Dead.

Watch The Walking Dead on Philo

Based on the graphic novel The Walking Dead and developed by Frank Darabont, it isn’t just a show, it’s a dang phenomenon. In the 2010s, the post-apocalyptic and zombie genres exploded across all media. The Walking Dead is easily patient zero. Its made house hold names of everyone from Norman Reedus, Steven Yeun, Andrew Lincoln, and of course Jeffrey Dean Morgan.

Like previous popular programs, the final season is broken up into two parts. Part I of season 11 premiers this Sunday, and Part II will air in 2022. Still, you won’t want to miss this bittersweet, action-packed goodbye.

Here’s everything you need to know to watch The Walking Dead.

Where to watch The Walking Dead

The easiest (and most affordable) way to watch The Walking Dead is on Philo. Philo is a budget-minded streaming service, and depending on what channels you want, it might be right for you. The 59 Philo channels lean decidedly toward entertainment; the Philo channel list includes AMC, Discovery, IFC, Lifetime, and the Paramount Network, all for $20 a month. If you’re a fan of AMC, you’re in luck: You can find it on Philo. Philo also comes with free cloud DVR, but shows recorded are deleted after 30 days, so binge responsibly.

Other ways to watch The Walking Dead