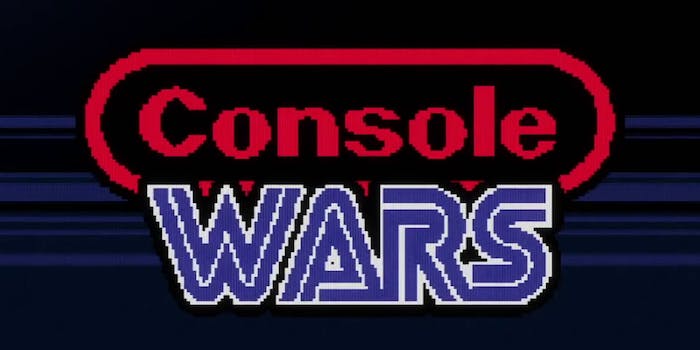 How to stream ‘Console Wars’

The battle that defined a generation.

If you were a kid in the ’90s, it was a decade of Nicktoons, Dunkaroos, and perhaps most of all, console wars.

Sega, the scrappy underdog, was hellbent on de-throning Nintendo from its cozy throne, chipping away at its astronomical market share of the video game market. There’s finally a documentary for this tumultuous time. Everyone involved on the frontlines of this conflict is there, from Nintendo of America President Howard Lincoln to his young hotshot enemy Tom Kalinske of Sega of America. And while Nintendo had Mario, Sega too would develop their own secret weapon with a spiky-haired blue hedgehog whose name escapes me.

Crazy Commercials. Blast-processing. Green blood. Senate committee hearings. The documentary takes a deep dive into every single angle of one of the most memorable rivalries of the 20th century.

Here’s everything you need to know to watch Console Wars.

What is Console Wars?

Console Wars is based on the book of the same name by Blake Harris, which dramatizes the Sega vs. Nintendo console battles of the ’90s. The rights to adapt it into a show were picked up in 2014 by Seth Rogan and Adam Goldberg. The drama is still in development, and will also be available on CBS All Access.

There are no reviews yet for this program. Reviews will be added when they become available.

How to stream Console Wars

CBS All Access is the network’s official entry into the streaming arena, and set the tone for other major networks launching their own streaming services. (Looking at you, Peacock.) It’s also the only game in town if you want to stream Console Wars. CBS All Access anchors itself in the vast CBS show library, going into TV history as well as relying on the Star Trek series and the crime dramas that help define it today. It also has a selection of movies tied to Paramount’s ownership by CBS parent Viacom. It’s also a destination for live events like the annual Grammy Awards, and it’s becoming a destination for live sports fans. The 2020 NWSL Challenge Cup and a new role as Champions League soccer host makes it a legitimate player in sports programming.