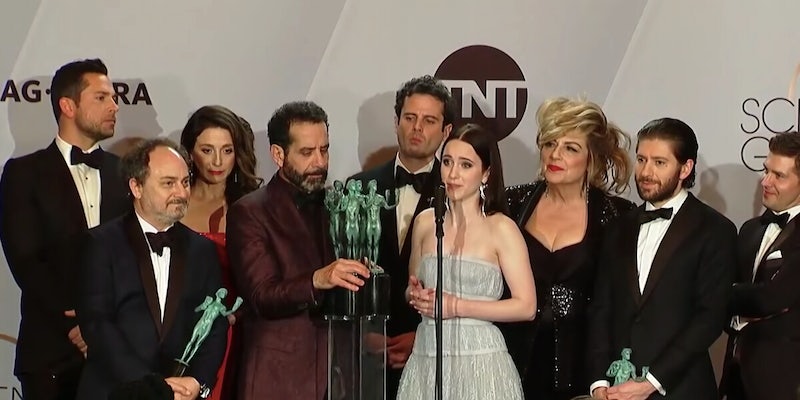 It was a good night for Netflix and Amazon.

Amazon Prime Video’s The Marvelous Mrs. Maisel and Netflix’s Ozark and Glow brought home five of the nine trophies given away in the television category of the 2019 Screen Actors Guild Awards Sunday night.

The Amazon comedy took the first three trophies handed out: outstanding performance by an ensemble cast in a comedy series and both male and female acting honors in a comedy series for Tony Shalhoub and Rachel Brosnahan, respectively. Mrs. Maisel won three of its four nominations—the first time that one series swept all three comedy categories since 30 Rock did in 2008, Deadline notes. Alex Borstein is the second cast member of the series nominated for best female actor in a comedy, bested only by Brosnahan, who plays the titular character.

Shalhoub beat more favored nominees like Bill Hader (Barry), Alan Arkin, and Michael Douglas (the last two for The Kominsky Method) for best male actor in a comedy. In his acceptance speech, Shalhoub gave a shoutout to Arkin, and then mentioned that members of the Mrs. Maisel cast are in the middle of contract renegotiations. “I want to thank everyone in Amazon, Jen Salke, and especially James Sterling in legal affairs, and not just because I’m in the middle of a renegotiation,” said Shalhoub. (Salke is the head of Amazon Studios, while Sterling is senior business affairs executive.)

The stars of Amy Sherman-Palladino’s period series are seeking a raise after it was renewed for a third season in May. According to sources, there are no major concerns in the ongoing renegotiations, which will spell significant salary increases for the main actors once finalized before season 3 opens, Deadline reports.

Meanwhile, the trophy for outstanding performance by a male actor in a drama series went to Jason Bateman for Netflix’s Ozark—his first win after eight SAG nominations. “This is reassuring,” he quipped in his acceptance speech. Bateman plays a financial adviser who drags his family from Chicago to the Missouri Ozarks in the crime drama that was recently renewed for a third season, to be released in 2019.

Netflix’s Glow took home outstanding action performance by a stunt ensemble honors in the TV category, which was announced on the red carpet during the live pre-show. The comedy, likewise renewed for a third season, is about the gimmicks of a syndicated women’s professional wrestling circuit set in 1980s L.A.

In the film category, Black Panther won big, nabbing trophies for outstanding performance by a cast and outstanding action performance by a stunt ensemble. This marks the first time a superhero movie is nominated for and ends up winning SAG’s top acting honor, notes Huffington Post. Many are saying this paves the way for the Marvel Studios superhero blockbuster to make history at the Academy Awards, where it’s nominated for seven Oscars, including best picture. The SAG win of the Ryan Coogler-directed film puts it “squarely in contention for best picture at the Academy Awards,” observes the Associated Press. “Actors make up the largest percentage of the academy, so their preferences can have an especially large impact on the Oscar race. In the last decade the SAG ensemble winner has gone on to win best picture at the Academy Awards half of the time,” writes AP.

However, there was one streaming title noticeably snubbed by the actors guild in the motion picture category: Roma, Netflix’s first-ever film to be nominated for best picture at the Academy Awards—a leading contender at that, with a total of 10 nods. Not that it should be cause for major concern; with 15 Oscar nominations for streaming giant Netflix alone, hopes are high that streaming services’ winning streak stretches all the way to the awards night on Feb. 25.

You can view the rest of the SAG Awards winners here.