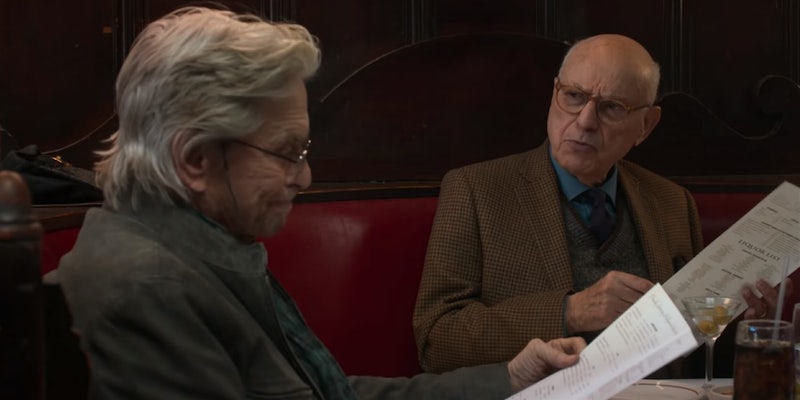 Netflix's latest show about aging has big names but little in the way of story.

Chuck Lorre, creator of The Big Bang Theory, Two and a Half Men, and canceled Netflix original series Disjointed, thanked Netflix several times after the win, signaling that there might have been a little more effort to make this happen. It marked Netflix’s first win in the best TV comedy category.

The Kominsky Method isn’t really about anything in particular: Michael Douglas (who also won best actor) plays acting coach Sandy Kominsky, and Alan Arkin is his longtime friend and agent Norman Newlander. They live in Los Angeles and seem to be living comfortably. Death and approaching death is a central thread: There’s the loss of Norman’s wife to cancer early on and Sandy’s ongoing issues with his prostate, which are not contained to one episode but continue for the whole season. There’s nothing to really resolve at the end of each episode, like in a traditional sitcom. It’s also pretty dark and sad, and some of the jokes land with a thud. (Sandy telling a group of women at a playground who think he might be a pedophile, “I’m not a pervert, I’m an actor,” is a little too on the nose for a show released in 2018.)

The series beat out HBO’s Barry, another comedy about an acting coach (Henry Winkler) in Los Angeles. Barry actually gives a little more time and nuance to its characters, whereas The Kominsky Method’s supporting cast, like Norman’s opioid-addicted daughter Phoebe (Lisa Edelstein), is compartmentalized in favor of Sandy and Norman’s banter. And some of that banter is funny, but the show is really about these two old guys. We don’t get rich inner lives for anyone else.

The Kominsky Method, released in mid-November, didn’t produce a catchphrase or meme or something Netflix could really promote, and so it flew under the radar for a lot of viewers. But Netflix seems to be chasing a specific demographic here.

The Kominsky Method’s obvious predecessor is Grace and Frankie, a show about two women (Lily Tomlin and Jane Fonda) in their 70s trying to figure out life after their husbands leave them. It’s about to debut its fifth season this month and Tomlin and Fonda are certainly on par with Douglas and Arkin, but the series has only been nominated for one Golden Globe—Tomlin for best actress in 2016. It explores the issues women face at a certain age and was co-created by Marta Kauffman (Friends).

But Grace and Frankie is mostly focused on the friendship between the two women, while The Kominsky Method is heavily tied to the long careers of these two men in Hollywood—and, ostensibly, they’ve been allowed to exist this long because they’re men. (It doesn’t help that Lorre has consistently dodged questions about disgraced former CBS CEO Les Moonves.)

Netflix’s recent hit Bird Box proved that people want to see movies headlined by older women, but the platform is still trying to work its Kominsky Method magic on other titles. This week it releases The Last Laugh, a comedy starring Chevy Chase and Richard Dreyfuss as a former talent manager and comedian, respectively, who reunite at a retirement community and go on a road trip to recapture their old magic. Sounds exhaustingly familiar.

If anything, The Kominsky Method‘s Golden Globe win signaled the divide between having big names attached to a show about Hollywood (which Hollywood loves to reward) and having a show that actually has a vocal and dedicated viewership.