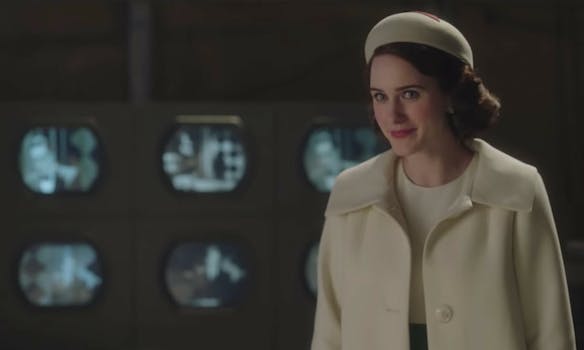 Season 2 of ‘The Marvelous Mrs. Maisel’ is absolutely delightful

Midge is back, and she's here to take on male comics in NYC.

In the first season of Amazon’s the Marvelous Mrs. Maisel, Miriam “Midge” Maisel, a 26-year-old Upper West Side Jewish housewife, finds a calling as a standup comedian after her husband leaves her for his secretary. Midge (Rachel Brosnahan) accidentally stumbles (literally—she is drunk the first time she gets onstage) into the standup scene, but she is innately good at telling jokes. Her razor-sharp, expletive-filled anecdotes about her family life, husband, and experience as a woman get big laughs and the attention of famous comedians.

But the road to becoming a professional comic isn’t easy. Over the first season, which was released a year ago, Midge gets arrested a couple of times, “bombs” during a set, and questions her choice to pursue a career path that is extremely hard to break into—especially for a woman in the late 1950s. (It’s still not easy to be a female comedian in 2018.) In the second season of Marvelous Mrs. Maisel, which is available on Amazon Prime on Wednesday, Midge is no longer wavering on her decision to do standup; it’s now part of her identity. “I’m a comedian,” she blurts out during a first date with a new love interest. “I go to clubs at night and tell jokes.” (Amazon doesn’t want me to spoil who this date is, but it’s easy to find out with a quick Google search.)

Most people close to Midge know that she is a comedian—except her parents. While she still lives with them and maintains her day job at the department store B. Altman, she has been able to keep her nightly activities a secret. That’s the main conflict bubbling up at the beginning of season 2 that will surely come to a head by the end of the season. But, luckily, the show also gives us plenty of other subplots to focus on. There’s rarely a dull moment. The new season of Marvelous Mrs. Maisel—at least the five out of 10 episodes that were made available to the press—easily outshines the first one. And that’s not an easy feat; the first season was well-liked by critics and picked up major awards at both the Golden Globes and Emmys this year. But creator Amy Sherman-Palladino, who also created Gilmore Girls, has a way of making you care about every character in her shows, not just the lead role. And the sets and production in this season are incredible. The result is a show with a deep emotional core that looks like a colorful ‘50s musical.

Like Gilmore Girls, Marvelous Mrs. Maisel is strongest when it focuses on the relationships between women. The show easily passes the Bechdel test. In the first season, we saw Susie Myerson (played by the incomparable Alex Borstein), who works at a club called the Gaslight, push Midge to really give standup comedy a shot. She becomes Midge’s manager and helps her make connections in the industry. In the new season, Midge and Susie are partners working to accelerate Midge’s career—although Midge keeps insisting that they’re also friends. They go to comedy shows together, meet for lunches, and get drunk. Midge and Susie have vastly different personal lives—Midge wears fancy designer clothes and lives with parents and their maid, while Susie wears pretty much the same outfit every day and looks for half-eaten food in trash cans—but they understand each other. Their goal is the same: Make Midge famous in an industry where mostly men thrive.

In the second episode of season 2, “Mid-way to Mid-town,” Midge blasts the male comics who go up before her at her first gig at a new venue. They’re “just standing there waiting for me to bomb,” she tells the audience, “…the highlight of their evening is the possibility of seeing a chick fail.” It feels like Midge is not just talking about the fictional men in the episode. When Susie is talking to a reporter about Midge in another episode, she tears down the claim that “women aren’t funny” and insists that people care what women have to say. In another episode, young women question their career prospects while studying at a university that lacks female professors. The show doesn’t even try to conceal its obviously feminist angle.

We also see a lot more of Midge’s parents, Rose and Abe Weissman (Marin Hinkle and Tony Shalhoub, respectively), who are working through their own issues. In the first whimsical episode, Rose flees to Paris, and Midge and Abe follow her. The scenes in Paris are funny and charming, featuring choreographed dance numbers over the Seine and montages of afternoons spent strolling markets and bakeries. When we’re placed back in reality in New York City, there is the sad feeling of returning home from a vacation in real life. But it doesn’t take long before the show takes us on another detour, this time to the Catskills for the family’s annual summer getaway. The Catskills episodes are aesthetically similar to scenes from a Wes Anderson film, which is either a pro or con based on your opinion of Anderson. They do offer a diversion from New York City and introduce us to a new character: Benjamin (Zachary Levi), who is likely to become a bigger part of the series.

If you’re wondering about Joel Maisel (Michael Zegen), Midge’s husband, he’s still a main part of the show. Even though everyone agrees he’s a complete jerk for the way he treated Midge, he manages to become a sympathetic character this season. The show gives him his own satisfying narrative and continues to focus on his relationship with his parents, Moishe and Shirley Maisel (Kevin Pollak and Caroline Aaron), as well as their family business.

The second season of Marvelous Mrs. Maisel is good TV. It’s a highly entertaining show that is invested in developing complex characters. The series is set in the ’50s, but you almost forget that fact because Sherman-Palladino’s stories are set in little their own little fictional bubbles where even bad events are seen through rose-colored glasses. The sun shines, a Barbra Streisand song plays, and Midge walks out in an amazing color-coordinated outfit. How does it all come together so perfectly? It is, as Midge would say, “witchcraft.”