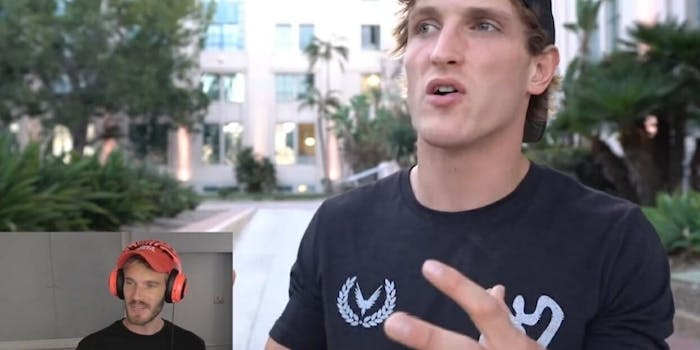 'Logan Paul plays the moral high ground, and I guess against KSI, that’s not really hard to do.'

Between Logan Paul ripping KSI for sexually objectifying women and KSI responding by calling Paul a “coward,” the line of fault could look blurry. But YouTube star PewDiePie knows exactly who’s to blame in this social media feud: Both of them.

In the leadup to the Aug. 25 KSI vs. Logan Paul boxing match, both amateur pugilists have attacked each other verbally (and, in one case, physically) in an attempt to compel you to spend $8 on YouTube to watch them fight.

In a video on Wednesday, PewDiePie called both of them “scumbags.”

(In case you thought PewDiePie was within his rights to insult other YouTubers, remember that he shared an offensive Demi Lovato meme last week and was forced to apologize for it, and he recently got into trouble for calling female streamers “stupid Twitch thots.”)

In his latest vlog, PewDiePie said Paul’s video—in which he called out KSI for insulting his girlfriend Chloe Bennet and showed clips from 2012 in which KSI objectified women to their face for YouTube clicks—was well-crafted. PewDiePie also said that Paul was reaching for the moral high ground, especially when Paul said, “[KSI is] the exact person that I’m working hard not to become.”

But PewDiePie doesn’t seem to believe Paul, probably because of the international outrage Paul brought on himself at the end of last year when he filmed and posted a dead body in a Japanese forest.

“Logan Paul plays the moral high ground, and I guess against KSI, that’s not really hard to do,” PewPie said. “But for Logan Paul to do this, it’s interesting, very interesting. And a lot of people bought it, and he does it really well because he has a strong argument.”

He continued, “Now KSI, he is a scumbag. You’re both scumbags. KSI has made the same [sexist] comments about my future wife, Marzia, and I never respond to it because it’s just cringey. … It’s such a low comment.”

PewDiePie also seemed surprised that Paul went after EA Sports for continuing to have a financial deal with KSI. “That’s a really low blow, if not equally vicious, because he’s essentially going after KSI’s livelihood,” he said.

He also accused Paul of manipulating old clips from KSI into the new storyline of how KSI is misogynistic. Basically, PewDiePie concluded there are no good guys in this narrative.

“It shows how Logan will take any step, even if it’s lying … because I don’t think he was wrong for being pissed off about the girlfriend comment,” PewDiePie said. “But the way he goes about it by going after his brands … he just doesn’t care … There are so many videos where Logan is equally as bad as KSI in my opinion … These guys are purely driven by money.”

So, in effect, they’re YouTubers looking for clicks and riches and will do and say whatever they can to increase both. Not unlike PewDiePie or, really, most YouTube stars themselves.

Update 7:52am CT, Aug. 17: PewDiePie has recanted his statement and said he was wrong to call KSI and Paul “scumbags.”

“There has always been a long drama between me and KSI and I don’t know why … I don’t care and I am sure we would get on fine, I would have a beer with him,” PewDiePie said on his YouTube channel, via Metro. “What do you say KSI? Can we bring peace finally and show an example of hope to the world?”

He also said he found the KSI-Paul feud entertaining and that his scumbag insult was “a dumb comment to make.”