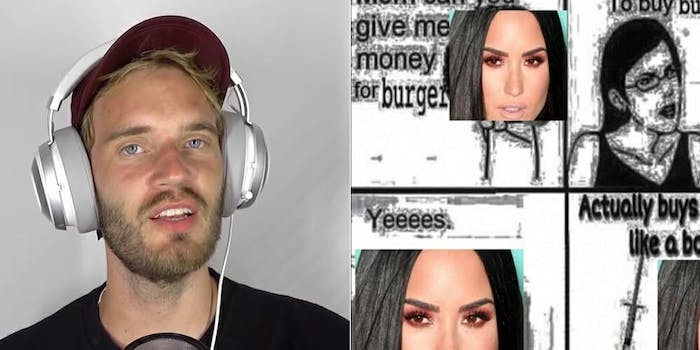 The man behind the controversial PewDiePie character, Felix Kjellberg, posted a video in which he “dropped the facade” and discussed mental health issues and online addiction to his channel of over 64 million subscribers this week. In the near-11-minute video, PewDiePie spoke candidly about the stress YouTube creators feel about having to continually top themselves and the unhealthy obsession with numbers that develops over time.

For a few hours, the internet felt sorry for the 28-year-old Swede. But true to his nature, PewDiePie did his best to stomp on all of the goodwill by posting an insensitive meme making fun of Demi Lovato’s recent overdose and her lifelong struggle with addiction hours later.

The cartoon meme depicted Lovato’s face asking a fictional woman for money to buy a burger, but the money will go instead to buy “heroin like a boss.”

The YouTube star deleted the meme after it was brought to his attention that it was incredibly insensitive. PewDiePie apologized and claimed to “not fully know” about the situation.

PewDiePie is apparently OK with making fun of Lovato’s battles with drug addiction and eating disorders but thinks doing it when the singer is reportedly hospitalized for those problems is the part that’s in poor taste. Intentional or accidental, the internet took PewDiePie to task over the stupidly insensitive tweet.

come on bro, this is making light of something that a lot of humanity struggles with day in and day out, and countless families have been torn apart by it. Offensive humor for the sake of offensiveness isn’t edgy, it’s just lazy and destructive.

I'm not really that bothered by PewDiePie posting some shitty meme about Demi Lovato doing heroine. What bothers me is how many of his edgy fans will jump down anyone's throat if they dare say they think it isn't funny. You don't have to be an ass to someone for having empathy.

It’s pathetic that people are making fun of Demi Lovato. She has done nothing but help countless people and use her platform for real issues for the last 6 years. She’s saved so many damn people, including me. Put some damn respect on her name. #PewdiepieisOverParty

Lovato is awake and in stable condition after the overdose. PewDiePie’s popularity remains on life support.